What happens when calcium carbonate hits the ground

While the stone is mechanically crushed in the case of physical weathering, e.g. by wind, precipitation or running water, in the case of chemical weathering it (or the chemical substances it consists of) is broken down into other chemical substances.
When the limestone is dissolved, cracks appear in the stone. (Rain) water can already penetrate into small cracks and further dissolve the constituents of the limestone, the cracks become larger, more water can penetrate, etc. - and ultimately arise Caves.

What exactly happens chemically when lime is dissolved? The rainwater absorbs carbon dioxide from the air. Carbonic acid is formed from water and carbon dioxide. This reacts with calcium carbonate to form calcium hydrogen carbonate, which dissolves very well in water:

or summarized in a reaction equation (the double arrow takes into account the fact that every chemical reaction can also take place in the opposite direction):

While the water runs in gullies and crevices through the limestone, it dissolves carbonate in this way until it is saturated with carbonate - i.e. it cannot absorb any more calcium carbonate. If the running water hits a cavity (like a cave), it comes into contact with air. Then carbon dioxide leaves the water - that is, calcium hydrogen carbonate decomposes again into water, carbon dioxide and calcium carbonate. If the water runs only slowly, e.g. along a cave ceiling, it forms due to the Surface tension Drops. A collection of droplets has a larger surface to the ambient air than the same amount of water in a contiguous body or film of water. The release of carbon dioxide is facilitated by the large surface.
Due to the escape of carbon dioxide, calcium carbonate remains in the water, which is only poorly soluble - lime was cancelled (i.e. it settles out of the solution as a solid substance) and forms new limestone. This newly formed limestone is called Stalactite or Sinter. Over time, cones form on the cave ceiling (Stalactites) or other structures. If the drop finally falls, it bursts when it hits the ground. The surface to the surrounding air increases again (many small drops have a larger surface than a large one), again carbon dioxide escapes and as a result lime also falls on the ground stalagmite arises.

It is important that the lime is not deposited because the water evaporates, but because it gives off carbon dioxide and the remaining calcium carbonate is poorly soluble and therefore has to leave the water.

How quickly this process takes place depends on the temperature, the amount of water, the lime and carbon dioxide content of the water. In terms of magnitude, the Growth rate at 0.1 mm per year. The nature of the mountain surface is also important: If the surface is only sparsely vegetated and only slightly or not at all covered by humus, the water absorbs little carbon dioxide and can therefore dissolve and redeposit little limestone. The stalactites therefore grow more slowly in caves under uncultivated soils. 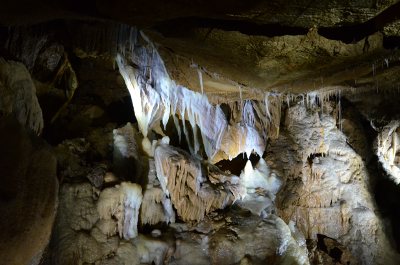 The color of stalactites is created by the addition of minerals: iron causes a yellow or red discoloration, copper a greenish color, manganese causes the stalactite to be black. Caption end

The origin explains the name: stalactite is a stone that is formed by dripping water.

Stalactite is a form of Sinter. In general, sinter is used to describe deposits that arise when minerals dissolved in water are deposited. In the case of stalactites, these are (mostly) limescale deposits, but there are also other types of sinter. For example, they also count Flint bulbsthat have formed in the chalk to sinter. Flint is also formed by deposits from an aqueous solution (in this case a solution containing silica) in the pores of the surrounding rock (here: the chalk). 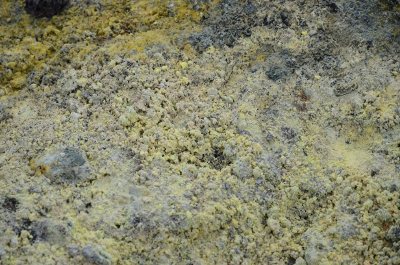 Sinter of sulfur in the caldera of the Krafla volcano (Iceland). Caption end

We took the photos shown here in two caves: 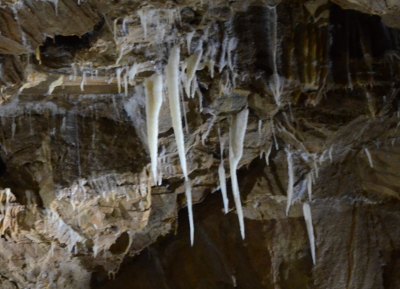 A stalactite is formed when drops of water deposit lime on the ceiling of the cave. So the stalactite grows down from the cave ceiling. (Show cave autumn labyrinth near Breitscheid) Caption end
Fig. 4a ¦ stalagmite 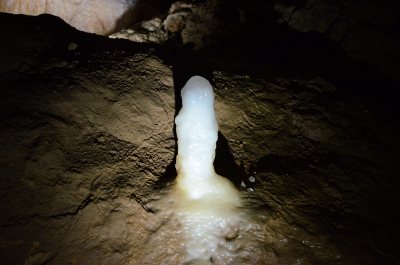 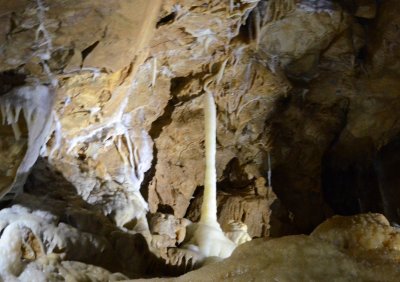 Caption Stalagmites are formed when drops of water fall on the earth and deposit lime there. So stalagmites grow upwards from the ground. (Show cave autumn labyrinth near Breitscheid) Caption end
Fig. 5 ¦ Stalagnate 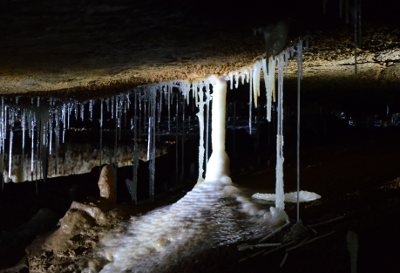 A stalagmite or stalactite column is created when a stalagmite and a stalactite grow together. (This small stalagnate is in the autumn labyrinth show cave near Breitscheid) Caption at the end
Fig. 6a ¦ Button sinter 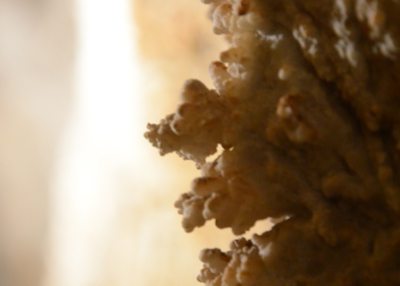 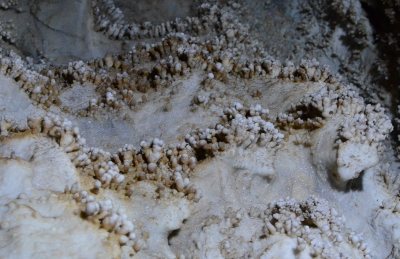 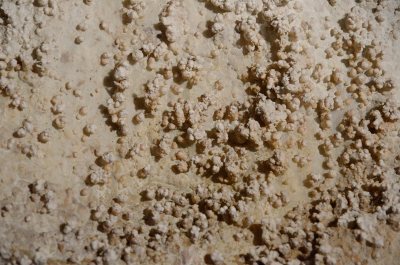 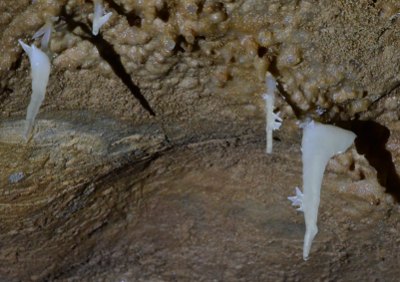 CaptionEccentrics are very rare. The water that allows them to grow can flow as a film on the surface, but also in a capillary inside the eccentrics. Their shape is irregular; there are some who look like writhing worms. They can grow from all sides of the cave and often do so against the force of gravity. (Even if stalagmites grow from bottom to top, gravity is ultimately the cause - because it lets the water droplets fall down). Its origin has not yet been finally clarified; the cause of its growth could be Capillary forces be. Capillary forces also ensure, for example, that water penetrates a sponge when it is placed in a puddle of water - here, too, the water then moves against gravity. Similarly, the water in the surface film or the central capillary in the eccentrics could be driven against gravity by capillary forces. If lime is deposited in the water, the eccentric will automatically grow against the force of gravity. (Show cave autumn labyrinth near Breitscheid) Caption end
Fig. 8a ¦ Sinter vane 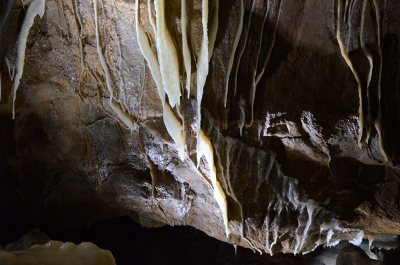 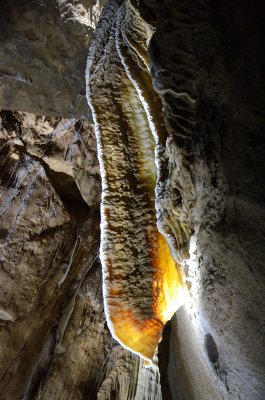 Caption Sinter flags or sinter curtains form along overhanging surfaces. While with a horizontal ceiling the drops simply fall down and form stalactites and stalagmites, the water runs down an inclined surface and leaves a trail of lime. If the drops follow the same preferred path over and over again, a sinter curtain forms from the lime track over time. The sinter flag in the picture below is 8 m long. (Show cave autumn labyrinth near Breitscheid) Caption end
Fig. 9 ¦ Sinter basin 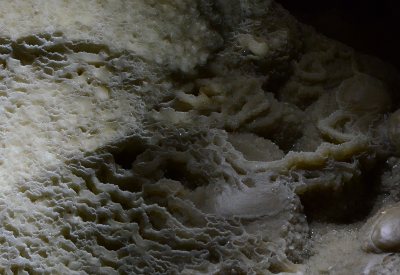 Caption: Sinter basins are created when water forms puddles in depressions, remains there and evaporates. This increases the concentration of dissolved lime in the remaining water, as it does not evaporate with it. Deposits form on the edges of the puddle and because the water level is falling, they will eventually be above the water level. (Similar to the limescale rims that can sometimes be seen in vessels at home when water has been standing there for a long time and evaporating.) In this way, vessel-like depressions form over time, which are arranged one above the other like terraces and water overflows to the next Submit sinter basin. The sinter basins shown in the photo are very small - they can also be much larger, up to several meters wide. (Show cave autumn labyrinth near Breitscheid) Caption end
Fig. 10a ¦ Sinterfall 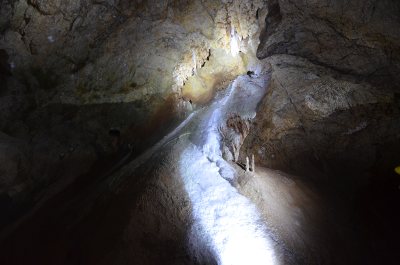 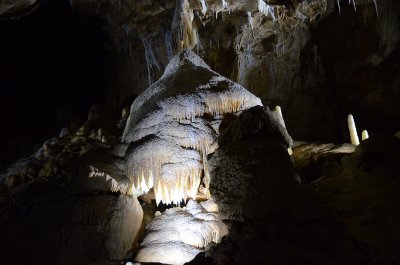 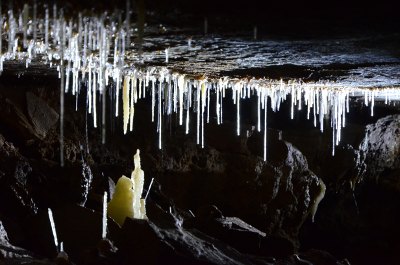 Tube sinter or sinter tubes are very straight, hollow on the inside, have a maximum diameter of 1 cm and grow downwards from the ceiling of the cave. While with stalactite the water flows along the outside of the stalactite, with sintered tubes it flows inside. The tubes are therefore dry on the outside. They arise because water droplets hanging from the ceiling touch a circular base. The lime is deposited along the circular border of this base area. In this way a ring is formed, which then grows downwards and thus becomes a tube. If the tube clogs, the water can only flow outside and a stalactite is created. (But not all stalactites arise from sintered tubes.)
Such stalactites can also be seen between the tubes; a stalagmite at the bottom left.
(Show cave autumn labyrinth near Breitscheid) Caption end

If seeds or spores are carried into the cave by animals or people or by air or water, the light from the cave lighting is often sufficient to allow plants to grow. That is why these plants are called Lamp flora. Such lamp flora does not occur naturally and occurs only in illuminated, i.e. H. open to tourists, caves. Since the plants secrete acids, they can attack the stalactite. One tries to keep the lighting as low as possible. There is evidence that LED lamps are less beneficial for the lamp flora. 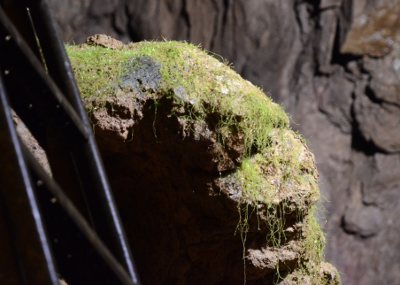