How does a laptop make sound?

Music production on the laptop

Music production on the laptop
What you need to know

The Music production on the laptop requires a combination of a high-performance computer and a suitable audio interface. Then multi-track recording, sound design or the production of complete tracks are possible. What to look out for and what pitfalls there are. 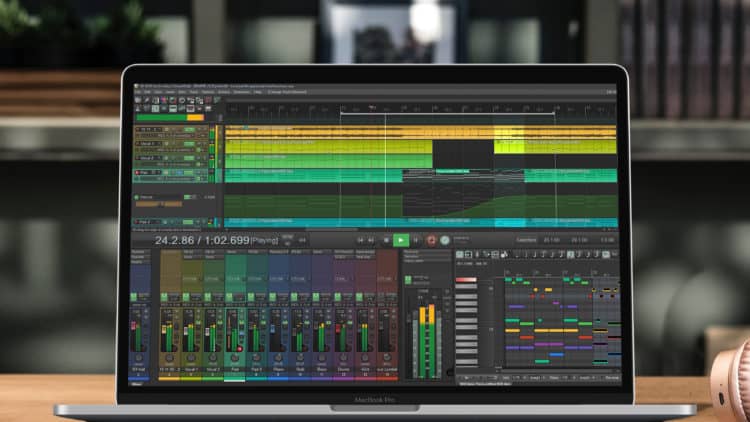 Music production on the laptop - you have to know that!

Music production on the laptop - is that even possible?

This question has to be answered in the affirmative, because the current laptops are very well equipped and fast. However, there are also a few things to consider when looking at music production on a laptop.

It starts with the fact that you have to choose between one of the two major operating systems and thus a certain type of notebook. So let's first look at Apple and Microsoft - the difference between an average Windows laptop and an Apple Macbook.

This guide should by no means end in Apple Windows bashing, but you should be aware of one important fact when producing music with a laptop: The internal audio processing in the Apple cosmos is very well suited for making music "in the box". That goes for the iMac, the iPad, the Macbook Air, the Macbook Pro and so on. 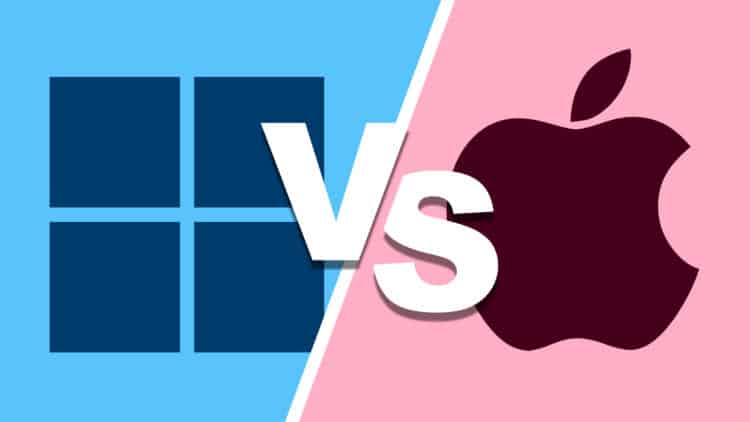 In detail: You can easily grab any Macbook and play in virtual instruments live without noticeable (!) Delay - e.g. via the computer keyboard. As long as the CPU usage is kept within limits, you won't hear any cracks.

Unfortunately, it looks different with an average Windows laptop: The internal sound card creates a very long delay when importing. Cracks also often cloud the first hearing impression. That sounds blanket, but unfortunately it is due to the Windows audio environment.

Only an audio interface with a special ASIO driver transforms Windows into a high-performance audio center.

Music production on the laptop: do you need an audio interface?

It all depends on how far you want to get into music production.

Example No. 1: You already have a Macbook and want to produce electronic dance music (house, techno, etc.). Since this genre works without acoustic instruments, you can easily produce "in the box". An audio interface is not necessary because you can play in virtual instruments without noticeable latency. The only bottleneck is the CPU performance, but more on that in a moment.

The same endeavor would look different with an average Windows laptop, since you could only import the virtual instruments with a noticeable delay. You also have to plan for cracks. Buying an audio interface would be appropriate here.

Example no.2: You want to record acoustic instruments and vocals. For this you need at least a microphone and definitely an audio interface. Why? Because the microphone signal is very quiet and needs to be amplified. You won't be able to expect this additional service from any onboard sound card - not even from Apple. In addition, microphone inputs on onboard sound cards are always available in 3.5 mm mini-jack design - in the professional area, however, you will find 6.3 mm jack and XLR.

Mobility - For singer songwriters & Co. with the Focusrite Scarlett 2i2

Would you like to record your own music on the iPad, but need a microphone and headphones in addition to the appropriate audio interface? Then an audio interface bundle would be an option for you. 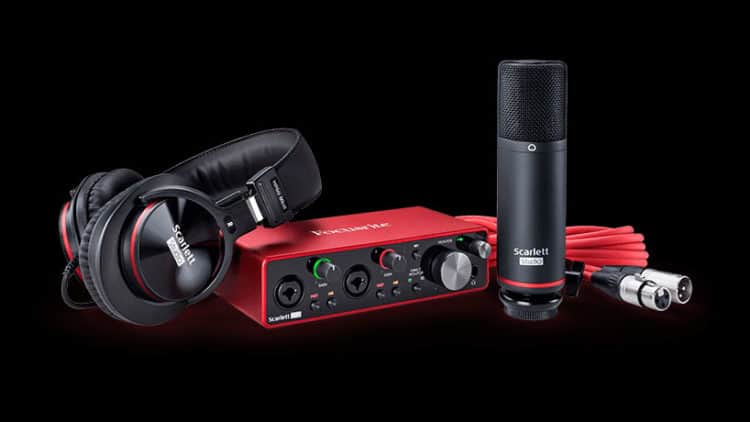 A suitable candidate would be the Focusrite Scarlett 2i2 Studio 3rd Gen bundle for 279 euros, which has just come onto the market. It not only fulfills the aforementioned basics, but also comes with two high-quality preamplifiers.

In conjunction with the supplied condenser microphone, you can record acoustic instruments or your voice in professional quality. And so that you can listen to your performance undisturbed, you will find closed studio headphones in the bundle.

Find out more in the Focusrite Scarlett 2i2 (3rd gen) review on delamar.

What can we conclude from this?

If you only produce music in the (!) Laptop, it depends first of all on the performance of the internal sound card. Macbooks do significantly better here than average Windows laptops. If you want to integrate external instruments into the production instead, you will need an interface - an audio interface.

What is the performance of the laptop?

On the other hand, if you want to play legendary vintage synthesizers like the Moog Minimoog or Oberheim SEM, you will find CPU-hungry emulations in plug-in format. u-he Diva is a very hot candidate in this context, which sounds extremely good, but also consumes a lot of CPU power. 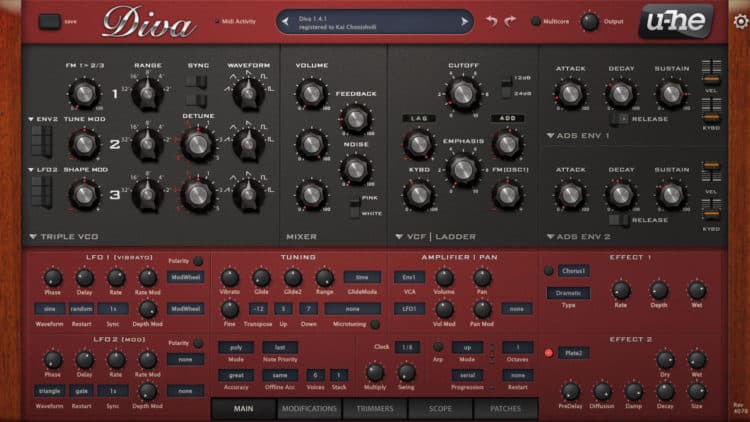 u-he Diva is a very CPU hungry plug-in. Good sound has its price.

If you want to record your band instead and supply the artists with real-time effects such as reverb, delay and compression, things get complicated: the more tracks you record in your DAW, the more the CPU is used.
If the musicians want to listen to their sound through headphones with as little delay as possible, you have to reduce the latency in the audio interface. This automatically increases the CPU load.
And if you then use plug-ins so that the musicians can hear their performance effectively, the CPU usage goes up again.

Does the audio interface have to be particularly fast?

When you talk about "fast" when it comes to an audio interface, you ultimately mean a low latency. This is the delay that you feel when playing in virtual instruments or when listening to the microphone signal. This point is responsible for the fun factor - to put it simply.

In general, it is worth investing in an audio interface with low latency values ​​if you are aiming for music production on a laptop. Why? Because this increases the fun of the game and also minimizes the CPU load. Because: The lower the latency should be, the higher you have to set the buffer size in the audio interface options. 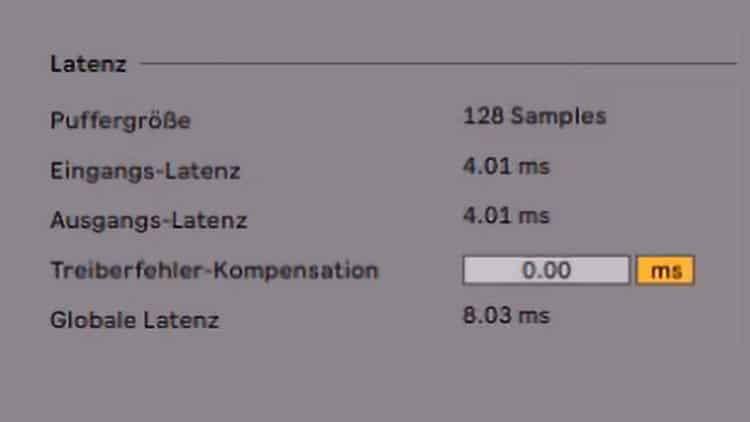 The latency of the audio interface is calculated in the DAW - here Ableton Live 10.

Without wanting to go into further detail, the following will help you in practice: Get different audio interfaces in the studio. Connect each device to the computer one by one and define the same buffer size for each interface - e.g. 512 samples. The DAW will automatically calculate a latency value for you. So you can compare these values ​​with each other and draw conclusions about the performance of the respective interface.

Volume: When you make music on your laptop, you should always take fan noise into account. As soon as your computer reaches the limit, the fans spin up. This is annoying not only when recording via the microphone, but also when listening to it via loudspeakers.

Therefore: the more powerful your laptop is, the less often you will hear the fan.

In addition: If your laptop is a real workhorse, then check in advance whether the maximum performance can be achieved without a power supply. Imagine you are doing a gig with your laptop and the load is a moderate 40 percent.

If, for whatever reason, the plug is pulled from the notebook and it uses the battery, the performance can drop rapidly. Then the CPU utilization jumps to 60 or 70 percent and crackles can flow from the PA. Therefore, you should test this scenario in advance.