What if there is an abundance of resources

Is a global sand crisis looming?

Researchers are sounding the alarm: mankind's rapidly growing hunger for sand threats to get out of hand. The unregulated overexploitation of this dwindling resource is already having serious consequences for many regions: coasts are sinking, drinking water and fields are becoming too salty, and political tensions and conflicts are escalating. If no countermeasures are taken, there is a threat of a global sand crisis, warn the scientists in the specialist magazine "Science".

At first glance, there is an abundance of sand on earth: it covers beaches, seabeds and desert regions, piles up dunes and emerges in many soils. Despite this abundance, there is one problem: sand is not a rapidly renewable resource. It takes tens of thousands and more years for erosion to grind rocks into myriads of tiny grains.

But mankind has an enormous hunger for sand: it is indispensable for the construction industry, but it is also needed as a raw material for glass and the semiconductors in computers, solar cells and other technologists. "Sand and gravel make up the largest proportion of all materials extracted worldwide - even ahead of fossil fuels and biomass," reports Aurora Torres from the German Center for Integrative Biodiversity Research (iDiv) in Halle.

So far this has not seemed to be a problem, because sand is easy and cheap to mine and occurs almost everywhere in the world. It is also considered a so-called common good or "common pool" resource. This means that almost everyone has access to this resource and its extraction is therefore difficult to regulate. "Sand is a perfect example of a natural resource whose transactions seem simple but are in fact complex, with plenty of risk and inequality," said Jianguo Liu of Michigan State University.

There is already a twofold problem with sand: On the one hand, supplies are becoming increasingly scarce. Many of the once rich deposits are already exploited or overexploited - also because not all sand is suitable for use. At the same time, the increasingly dense settlement of coastal regions, rising sea levels and increasing erosion mean that many sand deposits are disappearing or being built over and are therefore no longer accessible. 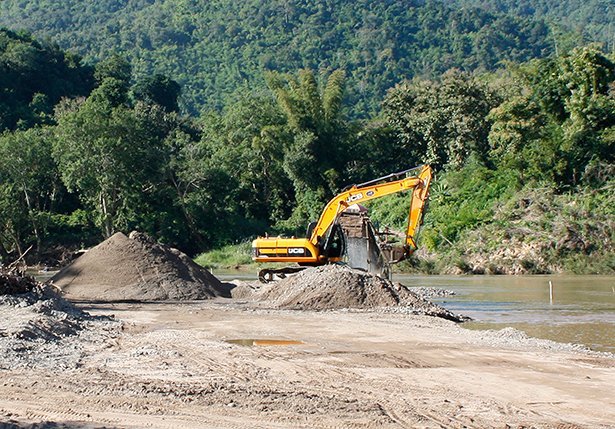 Sand mining on a tributary of the Mekong in Laos. © Aurora Torres / iDiv

On the other hand, global demand is increasing rapidly. "The main driver of this development is the rapid expansion of cities," explain the researchers. "It is putting the limited sand resources more and more under pressure." However, because no one knows exactly how much usable sand there is around the world, there are no international agreements, guidelines or controls that could steer this exploding demand into regulated channels.

The result: Scarcity and high profits are already increasingly leading to political conflicts, crime and violence. “In India, the sand mafia is already considered one of the most powerful and violent organized crime groups - hundreds of people have already been killed in 'sand wars,” report Torres and her colleagues.

There are already frequent conflicts and political tensions among neighboring states because one is literally digging the sand off the other. Singapore, for example, imports large quantities of sand for land reclamation from the surrounding regions - and can pay good prices for it because of its prosperity. The less rich neighboring countries are left behind.

Above all, overexploitation has negative consequences for the environment and people in the sand mining areas: In the Mekong Delta and other coastal areas in Southeast Asia, sand mining leads to a lack of groundwater and subsidence, as the researchers report. As a result, sea water penetrates further and further inland and salty drinking water, fields and soil.

"Sand mining is also a common cause of bank and coastline erosion, making these areas more prone to natural disasters such as floods, storm surges and tsunamis," explain Torres and her colleagues. For example, the heavy sand production in Sri Lanka worsened the effects of the tsunami in 2004. "Ironically, this led to the region's demand for sand even increasing after the reconstruction," the researchers say.

So far, these hidden costs of sand extraction have mostly played no role for the main customers - the poorer regions of the world are primarily affected. But in view of the increasingly scarce resource, the world can no longer afford this: “We urgently need to know the real budget of the global resource sand - and also shed light on the hidden costs of sand extraction and trade,” emphasize the researchers .

In their opinion, only on this basis is sustainable and fair use of this valuable resource possible in the long term. "We need more coordination between national and international actors, monitoring and approval regulations for the dismantling and a system of compensation payments for the ecological and social consequences," say Torres and her colleagues. (Science, 2017; doi: 10.11126 / science.aao0503)