How were atomic bombs tested first

On July 16, 1945, the first nuclear weapon in history exploded over the desert in New Mexico, USA. At the Alamogordo test site, in the desert of the "Jornada del Muerto" (Journey of Death), the USA tested a radically newly developed implosion weapon in Los Alamos and was supposed to end World War II. The plutonium bomb that exploded during the "Trinity" nuclear test, was the same type of bomb that was dropped on Nagasaki on August 9, killing 64,000 people in 4 months.

Since there had never been a full nuclear weapon explosion before, it was deemed necessary to first observe it under test conditions before it was dropped on humans. The design of the plutonium explosive device called "Gadget" used a new technology that could not be evaluated without a test.

The cannon-type uranium bomb that was used in Hiroshima on August 6, however, did not need to be tested because it was considered "foolproof." Apart from that, there was not enough material available for a second uranium bomb to allow use in Hiroshima to conduct a test, so the first use of a nuclear weapon with 136,000 deaths is considered the second "nuclear test" in history.

Why the first test was called "Trinity" is not certain. Perhaps that is what the scientific director of the Manhattan Project Robert Oppenheimer called the test, referring to the Hindu Trinity of Brahma (the Creator), Vishnu (the Preserver), and Shiva (the destroyer). Oppenheimer liked to read Sanskrit and after the nuclear test he quoted a passage from the Bhagavad-Gita (see above). Nevertheless, there is also the assumption that "Trinity" is the name of a cursed one near Los Alamos and therefore from the Indians abandoned turquoise mine. Another source says that Oppenheimer is referring to a poem by John Donne. Oppenheimer himself wrote to the military director of the Manhattan project, Leslie Groves, that he himself did not know exactly why he called the test that. 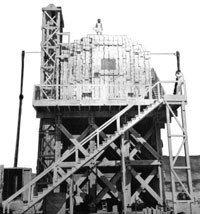 The explosive device was installed on a 30 meter high steel frame as late as possible because of the unusually high number of thunderstorms that July. Just a few days earlier, lightning had struck a bomb filled with ordinary explosives, which was hung up there as a test and which then exploded.

At two o'clock all participants gathered in the main camp, 15.5 kilometers from "Point Zero". Equipped with sunglasses and sunscreen, they thought they could protect themselves from the glaring light. Dance music played from the loudspeakers and messages about the stand were played The test was supposed to take place at four o'clock, but had to be postponed for an hour and a half due to bad weather.

The test at 5.29:45 a.m. Local time on July 16, 1945 exceeded almost all expectations. The explosive power of the first atomic bomb was equivalent to around 20,000 tons of trinitrotoluene (TNT). The lightning could still be seen almost 300 km away - the mushroom cloud towered 12 kilometers high. The heat of the explosion even melted the sandy earth around the tower into a green glassy crust called "trinitite." The tower vanished into thin air. The explosion created a crater three meters deep and 330 meters wide.

Groves' deputy, General Thomas Farrell, described the atomic explosion as follows:
"The whole country was illuminated by a scorching light, the strength of which was many times greater than that of the midday sun ... Thirty seconds later the explosion came first, the air pressure crashed hard against people and things, and then almost immediately followed a loud and sustained one gruesome thunder, like a warning about doomsday, which made us feel that we tiny beings dared in a blasphemous way to touch the forces that were previously reserved for the Almighty. Words are not enough to give those who weren ' t there the impression we got physically, mentally and spiritually. You have to be a witness to imagine it. "

Only General Groves remained unmoved and said to General Farrell, “The war is over. One or two of those things and Japan is done for. "Now we all go down in history as bastards," said Kenneth Bainbridge, who ran the Trinity project.

For the time being, the public was unaware of the first atomic explosion in history. Only the scientists passed the message on to their colleagues without permission, which resulted in a petition designed by Leo Szilard. Many did not want the bomb to be used without a demonstration and an opportunity to surrender. They also asked for effective international control of the new weapon. Groves then declared the petition "secret." It was hidden to transport the document without military guard. However, he did not want to provide a guard, so the petition with 67 names of distinguished scientists was left in the safe.

The Alamogordo test site has since been renamed and is called "White Sands Missile Range".