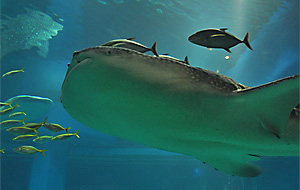 The whale shark (Rhincodon typus) is the largest shark and at the same time the largest fish of our time.

The whale shark is the only species in the genus Rhincodon, the only genus within the family Rhincodontidae.

The whale shark belongs to the order of the nurse shark-like (Orectolobiformes).

Because of its food specialization (plankton and other microorganisms) this shark is not dangerous for
the people.

However, accidents can occur due to the size and strength of the animals. Whale sharks occur occasionally but also in groups of up to 100 animals 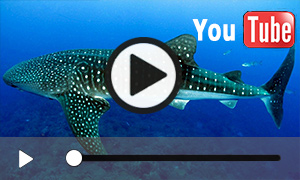 The main features of the whale shark:

The longest measured individual of a whale shark so far was 13.7 m long. There have been reports of individuals up to 18 or 20 m long based on sightings, but these are mainly based on overestimations and exaggerations that are common, especially in large animals.

Whale sharks can weigh over 12 tons.

The whale shark can live up to 100 years.

Whale sharks prefer a water temperature of 21 to 25 ° C and can be found in almost all warm, tropical and subtropical waters worldwide, although there are regions in which they occur more frequently. As a rule, these are areas with seasonal plankton blooms or regions in which plankton-rich, colder upwelling water can be observed.

Whale sharks often migrate between offshore and offshore areas. Male whale sharks cover considerable distances, female only shorter ones; they seem to return regularly to the area of ​​their birth. Male sharks also return to certain spots on a regular basis. They occur sporadically but also in groups of up to 100 animals.

The discovery of an egg with a size of about 30 by 14 by 9 cm with a 36 cm large whale shark embryo in 1953 in the Gulf of Mexico seemed to confirm the earlier assumption that whale sharks belonged to the egg-laying shark species.

It was not until a pregnant female was caught off Taiwan in 1995 and the scientific investigation of this specimen revealed that whale sharks can give birth to up to 300 live cubs. However, these cubs are not all at the same stage of development as many other shark species are. Rather, different young and older forms of embryonic development exist in parallel. The more they are developed, the closer the young are to the birth opening.

The female can probably control the development and thus the birth over many years and only gives birth if she estimates the chances of her young to survive as high. This is presumably closely related to the availability of food, the currents and the temperatures of the water. These assumptions are not yet sufficiently proven, but the most likely explanation for this peculiarity.

The egg found was probably one that was lost prematurely. Usually the sharks hatch in the uterus with a size of 58 to 64 cm. The smallest specimen found was about 40 cm long and was found in shallow water near the coastal town of Donsol in the Philippine province of Sorsogon. The sea area near Donsol is possibly a breeding area for whale sharks.

One can only speculate where the boys will continue their development after birth until they reach sexual maturity. It is likely that they will develop further at greater depths. Possibly below a depth of 300 meters, since above that they could represent food competitors for their adult conspecifics. This would be a disadvantage for young and old. They may be venturing into deeper layers of water that their parents cannot reach.

The whale shark only reproduces between the ages of 10 and 30 years and can live up to 100 years.

Similar to basking sharks and basking mouth sharks, they feed on plankton and other microorganisms, which they filter by sucking in the water.

Whale sharks actively suck in the water (up to 6000 l / h) and press it through their gills, which are
like filter apparatus are provided. This is formed from cartilage brackets, which connect the individual gill arches like a grid and on which matted skin teeth sit.

In order to meet their enormous need for food, they filter not only plankton but also small fish and other marine life from the water. Often they "stand" vertically in the water, their heads facing the surface of the water, or they move the head protruding from the water from one side to the other and open and close their mouths (7–28 times per minute). [

According to recent studies, however, they also eat fish up to the size of mackerel and small tuna.

Copyrights to the text

The copyrights and license rights for the images on this page are displayed when you click on the respective image or on "Show image rights".

All pictures were digitally processed by us and cropped in size.

If this page contains videos and you click (open) a video, personal data (IP address) will be sent to the operator of the video portal (YouTube). It is therefore possible that the video provider saves your access and can analyze your behavior. However, this only happens when you open a video on this page.

All articles in our fish dictionary are for general information only and do not claim to be correct or complete. No liability is assumed for the completeness and correctness.

All pictures were digitally edited and cropped by us. More information under "Image rights".