What is the literacy of Mizoram 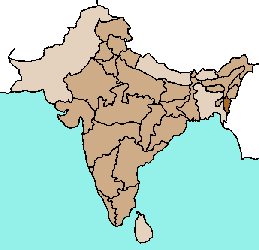 The sparsely populated Mizoram consists of green mountains and hills with many villages and a few cities. It is inhabited by the Mizo people (the O speaks like OU), whose different tribes form a cultural and linguistic community; their Sino-Tibetan language is written in the Latin alphabet and is the official language of administration at the state level. In addition, the Indo-European speaking Chakma (ethnically they are related to the Burmese), the Borok (who also inhabit the neighboring state of Tripura) and other minorities live in Mizoram. These latter two ethnic groups follow Hinayana Buddhism, while the Mizo are almost exclusively Christians (mostly Presbyterians).

The problems in Mizoram began a little later than in the neighboring countries, but were all the more severe: with a series of massive military operations, including air strikes, the central government put an end to the uprisings of the 1960s and from then on administered the country, which had been declared a Union territory, remotely. It was not until the end of the 80s that the state of Mizoram was founded and carefully equipped with competencies, which led to an initially slow but accelerated relaxation. Today this former problem province is considered completely pacified.

The language of the Mizo

The Mizo language (Mizo ṭawng) is written in the Latin alphabet. Regular orthography contains the letter Ṭ (T with a period below), which is used in the pronunciation for tr stands. This is a bit confusing because in my transliteration of the Indian names the same character stands for a retroflex T (Mizo has no retroflexes), but it cannot be easily changed. In addition, CH and CHH stand for a common or breathy alveolar to palatal affricate (in the transliteration for Indian names I write C and CH for this).

Most consonant letters can form di- or trigraphs with H, which then stand for breathy sounds (PH, TH, KH, CHH, THL, ṬH, HM, HN, NGH, HR, HL), but RH and LH are glottalized. A naked H often stands at the end of a syllable and then stands for a glottal stop, which can trigger orthographic ambiguities with the following consonant. Unlike AW, CH and NG, these H-digraphs are not regarded as separate letters.

The Mizo alphabet has no J, Q, X, Y and only uses W in the vowel character AW, which stands for an open O. Mizo has a total of eight different tones, which are ignored in the spelling; there are plans to change that, but so far the proposal has not caught on. Should that change, then the vowels A, E, I, U and AW would appear in eight different graphic variants: Long vowels as Á (high), À (low), Â (up – down) and Ä (down– up), and short vowels as Ǎ (rising), Ȧ (falling), unmarked A (middle) and Ạ (low). That would look a bit like Vietnamese in the typeface. There are also eight diphthongs (AI, EI, UI; AU, EU, IU; IA, UA) and four triphthongs (IAI, IAU, UAI, UAU). The vowel O (pronounced ou) stands a little outside the system and can only accept the four short tones.

Unlike Chinese and many other tonal languages, Mizo is not strictly monosyllabic, but also contains polysyllabic words which, however, are transparently composed of components. As usual for tonal languages, it has little morphology, but a bunch of derivative suffixes; . When you listen to it, Mizo sounds like Chinese, at least if you disregard the many breathy consonants. The Mizo typeface looks very peculiar due to the many digraphs with H.

In the Mizo you answer a no question with Yesif one confirms the negative facts; in English, the Mizo keep it the same. I think that's logical, but I still stumble over it again and again ("Do you have no rice?" - “Yes” - “Erhh?”).