How do I learn the correct EQ technique

Our Equalizer Tutorial covers the basics of EQs and helps you understand the effect and apply it correctly. Here you can find information about the use, the correct application and the different equalizers. 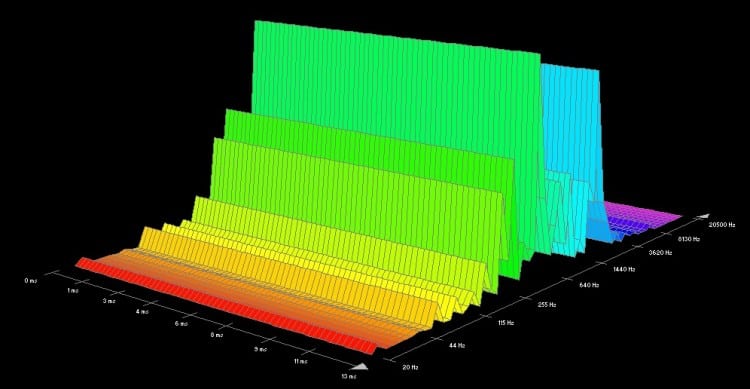 Here you can see the frequency spectrum of a trumpet shown graphically. |Image: cc-by-sa; Cantor JH.

What is an equalizer?

With the help of an equalizer you can change the entire sound of an instrument or a sound source by increasing and / or decreasing certain frequencies.

Reasons for using an EQ

There are a ton of different reasons for resorting to EQ. Common concerns can be:

For the sake of simplicity, let's start with the various parameters of an equalizer, which you will usually find in one form or another on every EQ.

The parameters of an EQ

There are three basic parameters:

frequency
The frequency is measured in Hertz (Hz) and stands for the center frequency in the EQ. Not only does the set frequency change for itself, but also those around it. The extent to which the change takes effect is influenced by the slope or filter quality Q (see below). [1000 Hz is 1 kHz by the way]

Here you can see the frequency spectrum of a trumpet shown graphically. |Image: cc-by-sa; Cantor JH.

Gain
Gain is specified in decibels (dB) and denotes the increase or decrease in volume (change in amplitude) caused by processing with the EQ occurs at the set frequency.

Filter quality Q
The filter quality Q denotes the slope of the filter used. With Q you can set how large the area around the selected center frequency (frequency band) should be processed by the EQ.

There are three different types of equalizers, which I will explain for you below. 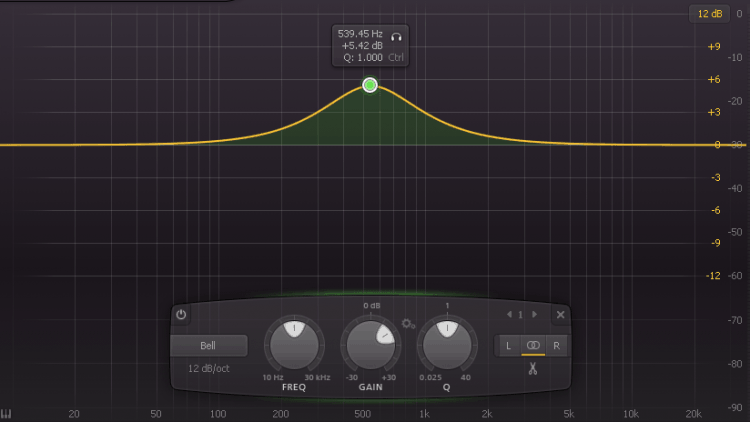 Parametric EQs are widespread in recording studios and are also popularly built into channel strips and mixing consoles. They can also often be found in music software due to their flexibility and performance.

The parametric EQ offers setting options for gain, frequency and slope, which can be used for smooth transitions between frequency bands or for narrow processing with a high slope.

Depending on the adjustable slope, parametric equalizers can be used for almost "surgical" interventions in the audio material. 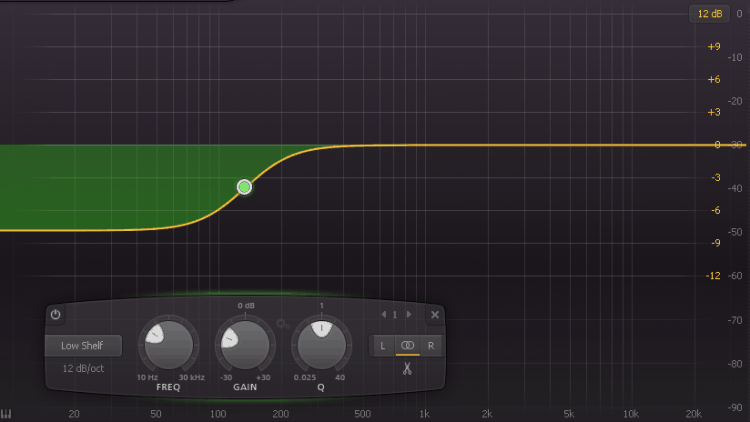 The bass and treble buttons on the stereo are often called Shelving EQ designed.

The graphic equalizer has sliders for all frequency bands.

With the graphic EQ, each frequency band is assigned its own (slider) controller. The center frequencies and the bandwidth of the individual frequency bands are usually fixed in this type of EQ. To edit the frequencies, there are usually vertically arranged sliders that allow the respective frequency to be boosted or cut.

Graphic EQs are often used to compensate for the room acoustics of the sound source and are often found on high-quality stereo systems or as outboard equipment for the recording studio.

In addition to the above-mentioned elementary parameters of an EQ, there are also controls for input and bypass on many hardware devices and software EQs. The input sensitivity can be adjusted on the device with the control for input, which is important to prevent unwanted distortion. The effect can be temporarily switched off for comparison purposes with the bypass button.

There are five types of equalizer (EQ) or filters:

This type can boost or cut a certain frequency. The parameter "Q" indicates the slope of the filter and thus influences the width of the increase or decrease by the (characteristic) frequency. High values ​​for the edge steepness reduce the width, while low values ​​widen the affected frequency range.

This filter lets through all frequencies above the set characteristic frequency and cuts off frequencies below.

This guy is the exact opposite. It lets the low frequencies pass while the high frequencies are cut off.

With this EQ, frequencies can be raised or lowered from the set characteristic frequency.

With this type of EQ, frequencies below the set frequency are boosted or cut.

High-pass, low-pass and the two shelving filters are ideal for giving tracks more transparency and clarity of sound.

General tips about the equalizer

When mixing a song, there are basically two ways to edit a track with the EQ effect:

When in doubt, you should always opt for the second method, because otherwise it quickly happens that you invest a lot of time in a "perfect sounding" track, only to later notice that it seems impossible to mix the remaining instruments sensibly. Either the track stands out too much or it just gets lost in the mix. Too bad about the time, because now you have to start all over with the equalizer.

The solo mode, on the other hand, is ideal for finding the characteristic frequencies or undesired frequencies of a track by means of so-called "sweeping". Sweeping means nothing else than sweeping through all frequencies with a peak EQ with a lot of gain and paying attention to which frequencies stand out.

Whole books could be written on the use of equalizers in music production and home recording, so I only want to refer to the following two articles on the subject of EQ for further reading at this point:

EQ: Three basic rules of equalizing
EQ: When to raise and when to lower

Application of the EQ

Like everything else in music production and (home) recording, applying EQ is an art in which you have to rely on your own ears and first make all mistakes in order to learn from them.

A healthy human ear can hear frequencies between 20 Hz and 20 kHz, which are divided into different frequency ranges.

It is advisable to internalize this subdivision in order to be able to create any desired effect on a track later. With a little practice you will quickly learn to differentiate between certain frequencies in the mix and to use them correctly.

Here is a brief overview of some instruments and their relative frequencies that you can use as a starting point to find your own EQ settings:

As usual, these are not generally always valid settings, the ear is the last resort!

Does the EQ influence the volume?

There is a lot of discussion about the use of EQ when mixing and sometimes losing sight of the essentials: the influence on the volume.

Whether you should use the EQ before or after adjusting the volume ratios of the instruments to one another, you can be divided. Some sound engineers swear that the first step is to edit a track with the EQ and only then adjust the volume. Others do it the other way around - I myself could almost no longer separate these two work steps from each other.

An example from the series of EQ plugins: The FabFilter Pro-Q 2.

No matter how you approach this task: you should always be aware that a reduction or a boost in the EQ also means a change in the volume of the instrument.

When it comes to volume ratios, it is also true that contrast has the greatest influence on the listener's perception and that it is not just about absolute values.

Incidentally, I can only advise against using effects in general to increase the volume of an instrument. Sometimes it's better to take a step back to recording.

Your feedback on EQ

If you liked the Equalizer tutorial, recommend it to your friends and acquaintances and link to us on your favorite blogs and forums for musicians! We look forward to your comment too!