Did dinosaurs evolve from lizards?

A dinosaur with a lizard in its stomach

Swallowed in one piece: The feathered predatory dinosaur Microraptor not only hunted birds, mammals and fish. Small reptiles were also on his menu, as a fossil find from China now shows. In the abdominal cavity of the 120 million year old fossil, researchers have discovered an almost completely preserved lizard. The victim is actually a previously unknown species.

In the early Cretaceous period, a number of bird-like dinosaurs lived on our planet, including the microraptor. This little predatory dinosaur was about the size of a hawk and had iridescent plumage. Thanks to long flight feathers on its four extremities and tail, this carnivore could probably glide longer distances without any problems - it may even hunt prey from the air.

But what was the Microraptor actually eating? "Direct evidence of predator-prey relationships is extremely rare in the fossil record," explain Jingmai O’Connor from the Chinese Academy of Sciences in Beijing and her colleagues. With the Microraptor, however, paleontologists have already been lucky three times: Animal remains in the digestive tract of Microraptor fossils show that the predatory dinosaur ate early bird species, small prehistoric mammals and fish, among other things. 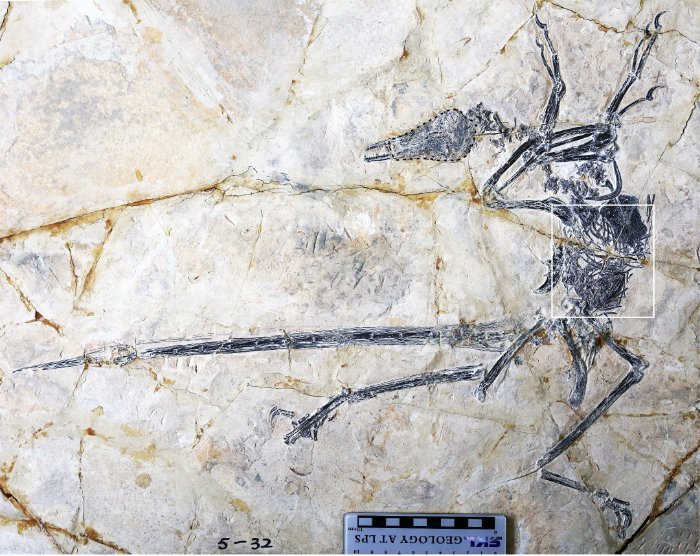 Surprise in the fossil: This dinosaur swallowed a lizard while it was alive. © Jingmai O'Connor

Now a new find provides further information about the nutritional spectrum of the Microraptor: In the so-called Jiufotang formation in northeast China, the scientists discovered a specimen of the species Microraptor zhaoianus, which surprised with a special stomach content. In the abdominal cavity of the 120 million year old fossil was an almost completely preserved lizard.

"This find supports the popular belief that the Microraptor was a nimble and opportunistic hunter," the team explains. Accordingly, the dinosaur apparently ate everything it came across, swam or flew. He swallowed his prey in one piece and head first - as do many reptiles living today and also carnivorous birds such as owls.

Digested with skin and bones

Unlike eagle owls and the like, predatory dinosaurs like the microraptor digested their prey completely instead of excreting indigestible remains in the form of bulbs or spitting balls. According to the researchers, analyzes of food residues in the belly of fossil Microraptor relatives indicate this. Other bird-like dinosaurs such as the Anchiornis, which lived in the late Jurassic, spit out vaults like the owls.

This shows that the modern digestive principle of these birds evidently developed several times independently of one another and at different times, according to the team. Because Microraptor apparently retained the original complete digestion of the reptiles despite its younger age. The older Anchiornis, on the other hand, and later the birds, developed the method of vault spewing independently of one another.

But the newly discovered fossil not only provides exciting insights into the nutrition and digestion of the microraptor. It also enriches the understanding of the animal world of that time. Because the lizard found in the dinosaur's stomach is a previously unknown species, as O’Connor and her colleagues report.

The species baptized Indrasaurus wangi therefore differs significantly from all other lizards known so far from the early Cretaceous - among other things, their large tooth gaps and the comparatively low crown height of the teeth are striking. "This find extends our knowledge of the ecological diversity and biodiversity in northeastern China in the early Cretaceous," the research team concludes. (Current Biology, 2019; doi: 10.1016 / j.cub.2019.06.020)