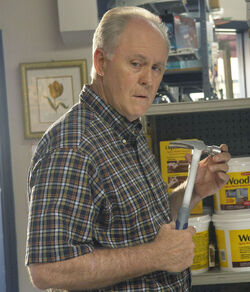 The name Trinity killer Arthur Mitchell received from Frank Lundy, because he had recognized that he always kills in series of three. For more information, see Arthur Mitchell.

Initially, it is believed that Trinity always kills at intervals of three. First, a middle-aged woman dies in a bathtub from a cut in the thigh artery. The second murder is a mother who is urged to jump from a high roof. In his third murder, a family man is brutally beaten to death with a craftsman's hammer.

What Frank Lundy did not realize, however, is that Trinity always murders at four-in-one intervals. First, a child is kidnapped and immersed in liquid concrete. Then the murders already described take place. Only Dexter is it possible to uncover this detail.

Arthur Mitchell saw his sister accidentally cut her femoral artery in an accident.

His mother became depressed and committed suicide after his sister's death.

After the death of his daughter and his wife, his father was no longer there for him in the eyes of Arthur Mitchell and also blamed him.

With the first murder of a boy he symbolizes himself. He wants to preserve the innocence of the little boy (in the figurative sense his own innocence).

Lundy had been looking for Trinity for a long time, but didn't finally hunt him down until he is retired and Trinity is in Miami. When he gets closer to him, however, he is shot by Trinity's daughter.

Although Dexter eventually kills Trinity, the Miami Metro Police Department is of course not aware of this, which is why they assume he has escaped. Jonah Mitchell later claims that Trinity killed his sister and his mother too - but the truth is that his sister killed herself and he killed his mother because she was just a wreck and pushed absolutely everything on him while she was still was attached to Arthur even though he was a monster. So Dexter lets him get away with it.