Why have automated calls increased in frequency 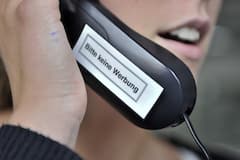 This emerges from the response of the federal government to a small request from the Greens, about which the "Saarbrücker Zeitung" previously reported in its Thursday edition. In the two previous years, the number was therefore even lower: in 2014 around 26,200, in 2015 around 24,500.

Telephone advertising complaints have increased dramatically
Image: dpa The federal government assumes that the sharp increase in 2017 has various reasons - among other things, consumers are sensitized to the topic because the media reported a lot about unauthorized advertising on the phone. Complaints could also be submitted more easily via the Federal Network Agency's updated online complaints platform. Telephone advertising is subject to strict rules in Germany. Nobody may be called for advertising purposes without their express prior consent.

Green parliamentary group Vice Oliver Krischer called for stricter laws: Contracts from unauthorized calls should always be confirmed in writing by the customers, he told the "Saarbrücker Zeitung". "That should let the number of contracts collapse and thus also make the rip-off model unattractive." In addition, the fines are too low.

In August, the Federal Network Agency announced that it had imposed a record fine of 300,000 euros on the electricity supplier Energy2day. Around 2500 complaints about advertising calls from the company had been received. It was the first time that the Federal Network Agency fully exhausted its range of fines. According to a study, the digital world market watchdog of the Schleswig-Holstein consumer advice center also came to the conclusion that consumers still feel annoyed by advertising calls.

Complaints to the Federal Network Agency in other areas

In total, the Federal Network Agency had received around 290,000 consumer complaints in the telecommunications sector by December. In 2016 there were 220,000 complaints.

This year, for example, according to the latest figures from the authority, over 160,000 written complaints and inquiries about the misuse of telephone numbers were received. In return, the Federal Network Agency switched off around 700 phone numbers and imposed a ban on billing and collection in 69 cases.

The BNetzA's telecommunications consumer service received around 78,000 inquiries and complaints in 2017. Faults in connections as well as problems when moving or providing new connections were the main focuses. In 2017, according to the authority, the poor accessibility of the customer service was criticized frequently.

Only when switching providers did the number of complaints drop slightly to around 17,000 cases. In around 3,000 cases, the BNetzA had to ensure in the form of escalation procedures at the companies that the change of provider was completed quickly. In these cases, there was an interruption in supply that lasted longer than a calendar day. The number of escalation procedures has remained roughly the same as in the previous year. According to BNetzA forecasts, the proportion of provider changes that are faulty and where the authorities have to intervene is less than one percent for landline connections. Over 99 percent of the provider changes go smoothly - or the authority does not find out about the problems.