Where can I use Bitcoin in Dubai

Luxury apartments for 15 Bitcoin? There is now in Dubai

Dubai is known for its ultra-modern and also unique architecture, which is particularly characterized by skyscrapers. However, the country should also have one of the most advanced housing markets in the world, as the Internet currency Bitcoin has now made it into the desert city's real estate market. Several luxury apartments have now been sold there in exchange for Bitcoins.

The entrepreneurs Doug Barrowman and Michelle Mone announced last year that they would sell several units of their multi-million dollar real estate project for Bitcoins. This idea evidently met with approval from the buyers, even if the cyber-related project will not be completed until 2020.

From digital to real value

Back in September 2017, the couple announced in an interview with “Business Insider” that they would be offering hundreds of apartments in the $ 327 million real estate project “The Aston Plaza & Residence” for cyber money. Barrow expressed the intention to offer Bitcoin investors more options than just pure speculation with the digital currency: "I want cryptocurrencies to be used to buy goods in the real world," "Business Insider" quotes the entrepreneur .

The prices for “swapping” the luxury apartments for digital money vary depending on the exchange rate and the size of the apartment: For example, a studio apartment worth 130,000 US dollars for 15 Bitcoin changed hands. For a two-bedroom apartment, prospective buyers had to put down 45 BTC instead of $ 380,000. Ultimately, 50 of the 1,300 units of the real estate project in Dubai's “Science Park”, a community for business and science, were exchanged for the crypto gold. Barrow told Business Insider that even more people were interested in this offer. 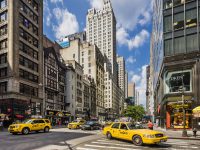 Expert Ulrich Steinmetz reports first hand on the most exciting real estate projects around the world.

Bitcoin in the real estate industry

The cyber currency has meanwhile found its way into the real estate industry worldwide. Bitcoin has not yet fully established itself, but such "exchange offers" can be found all over the world. Even in Germany and Switzerland there is a few opportunities to purchase real estate with Bitcoin. Objects from all over the world can be advertised and sold on the “Bitcoin Realestate” page, and luxury objects are often on offer.

In Germany, too, there seems to be great interest in such an option: Thomas Zabel, head of JLL Residential Developments, told the “Handelsblatt” that he regularly received inquiries about Bitcoin payment. He therefore assumes that the cryptocurrency has potential.

Anonymity as a risk?

Trading in Bitcoin is largely anonymous. Although transactions are recorded in a blockchain, they are not firmly linked to the identity of the parties involved. In addition, the crypto currency is not tied to a central institution, which makes internet money attractive for illegal purposes.

However, Barrowman explained that in his real estate project, the prospect would be checked as usual before a purchase. Likewise, no property can be purchased anonymously in Germany, as the land register entry remains an integral part of the real estate market and notaries are obliged to check prospective buyers.

The high volatility of cryptocurrencies usually represents a lower risk for sellers, explains the British entrepreneur. Because the value in Bitcoin is calculated based on the purchase price set in the respective fiat currency. After the purchase is complete, the internet money is finally converted back into US dollars. The volatility risk therefore falls more to the buyer of such a property.

by the editorial team investing in real estate
<?