What is a PAR sensor

The following technical article describes the theoretical basics as well as the metrological implementation of PAR (Photosynthetically Active Radiation) in more detail. The basics of light measurement with regard to light absorption by plants and their influence on plant growth are described. The spectrally measuring light meters described in this document were developed by Gigahertz-Optik GmbH especially for this application. They offer particular advantages compared to conventional PAR sensors, especially when assessing LED lights. In the article, the BTS256-EF measuring device developed by Gigahertz-Optik GmbH, which, among other things, can carry out this assessment, is discussed in more detail. 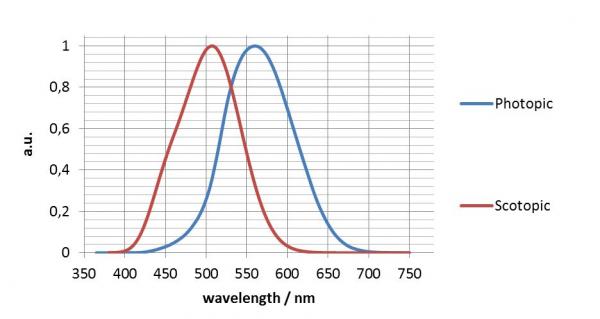 For example, to determine the intensity of visible light on a surface, the measured spectral radiometric irradiance is weighted with the V (λ) curve and integrated over the defined spectral range. The value obtained is then multiplied by the proportionality factor Km to obtain the photometric illuminance to calculate. The value then obtained is multiplied by the proportionality factor Km (physically from the definition of the SI base unit for the light intensity, 683 lm / W). Mathematically this is described by:

This concept can also be applied to plants. It should be noted, however, that plants have a different spectral absorption spectrum or sensitivity compared to the human eye. Therefore, photometric measurements such as lux and lumens are not really meaningful for plants. For this reason the concept of PAR, Photosynthetically Active Radiation, was born. An action function of (400-700) nm was defined for this. This action function is not sensitive below 400 nm and above 700 nm. In between, it has a constant photon sensitivity.

On the basis of this function, the radiated light energy in the spectral range (400-700) nm per time and area (unit PAR or W / m²) can be specified. Mathematically, the concept can be transferred from lighting technology:

Here h is Planck's quantum of action, c the speed of light, Avogadro's number and the wavelength of the photon. Here is an example conversion (for 550 nm):

Figure 3: Relative spectral action function for PAR of (400-700) nm for calculating the number of photons

This spectral action function has largely established itself for comparison measurements, etc. From a scientific point of view, however, the concept is not entirely satisfactory, because the spectral action function which is used for the PAR calculation (see Figure 3) does not correspond to the real action function of plants. In addition, almost every plant has a different function, which, however, are often similar. But this means that a measuring device should be able to investigate any effect functions. This almost inevitably leads to a spectrally measuring system, because optical filters can hardly be used to implement these arbitrarily many and complex effect functions. Figure 4 shows some spectral effect functions [1,2,5,6,7]. 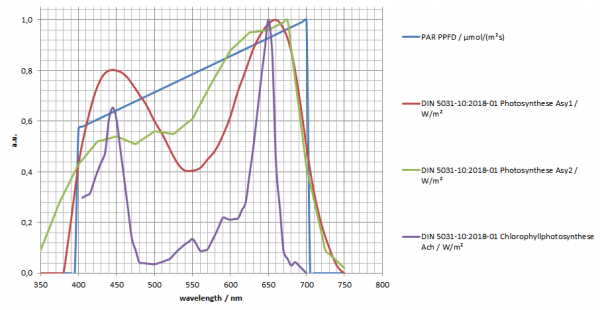 Photosynthetic Photon Flux Density (PPFD) is, as stated above, the measurement of the total number of photons within the PAR wavelength range that reach a surface area per second (over an area of ​​one square meter). Together with DLI (see below) this is one of the most important quantities. It is shown in μmol / (m²s) and can be viewed analogously to the measurement of illuminance (lux) for visible light.

The Daily light integral (DLI) is the complete amount of PAR that is received over a day. That means the DLI is a function of the PAR intensity distributed over the day which is integrated. The concept is comparable to that of a rain barrel, the rain of the whole day is collected in the barrel. The total amount of rain of the day corresponds to the DLI. The rain intensity distributed over the day corresponds in turn to the PAR function over the day. The metrological unit of the DLI is mol / m²d, where d stands for day and day [5].

Photosynthetic Photon Flux (PPF) is a measure of the total number of photons emitted by a light source per second within the PAR wavelength range. The size is measured in μmol / s. Lighting manufacturers can specify their growth light products in terms of PPF. It can be viewed as analogous to measuring the luminous flux (lumens) of visible light, which is typically the use of a system with an integrating sphere or a goniometer with a spectroradiometer as a sensor required.

The R / FR ratio (Red / FarRed Ratio) is the ratio of two effect functions to one another, see Figure 5. This means that the irradiance value in W / m² is determined for each of the two functions, which is then put into relation.

The background is based on the fact that photosynthesis varies in size at different wavelengths. The R / FR ratio tries to represent this dependency. The forward conversion (DIN 5031-10: 2018 photomorphogenesis Emo, Pr in W / m²) is compared to the backward conversion (DIN 5031-10: 2018 photomorphogenesis Emo, Pfr in W / m). From this relationship, for example, conclusions can be drawn about the so-called shadow avoidance syndrome. This indicates that plants align themselves in the direction of stock gaps. The plants regulate this through photoreceptors which are sensitive to these functions.

Spectroradiometers are able to provide complete spectral data of the measured light source, while radiometers give a single integral reading based on the spectral sensitivity of their detectors (defined by the filter combination) and the calibration source used, so a suitably filtered radiometer can be used to measure the Determine irradiance for a specific weighting function such as PAR or V (λ) (special case known as a photometer). Such integral measurement systems usually have a shorter measurement time compared to spectral measurement systems. However, an integral detector can only be adapted to one spectral function which, moreover, can never be realized perfectly. This spectral mismatch leads to measurement errors. In addition, neither an integral detector (radiometer) nor a quantum sensor can provide spectral information from LED growth lamps and thus their possibilities for development and monitoring in modern horticulture are severely limited. 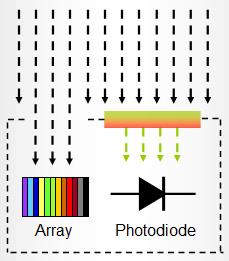 Gigahertz-Optik GmbH has therefore developed a number of technologies to overcome these limitations, including pure spectroradiometers such as the MSC15 and CSS-45 as well as the so-called bi-technology light sensor (BTS). The spectral range of these instruments extends beyond the PAR range (360-830) nm. The extended R / NIR range is of particular advantage (e.g. for the R / FR ratio). The versatile BTS measuring devices contain both a photodiode for integral measurement and a spectroradiometer with a CCD or CMOS array for spectral measurement. The combination of these two sensor technologies makes it possible to determine photometric parameters with the integrated photodiode as well as the spectral parameters. . The advantages of both sensor principles can thus be exploited. In addition, there is the advantage that the integral detector can be corrected directly with the data from the spectrometer with regard to the spectral mismatch (more information can be found in the information portal: BTS Technology).

The BTS256-EF is a spectrally and integrally measuring lux meter. This is made possible by the BiTec sensor developed by Gigahertz-Optik. 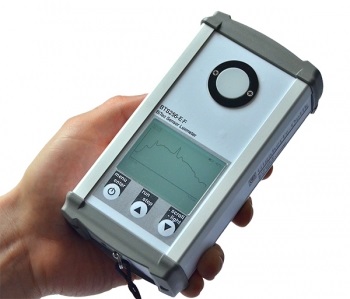 The measuring device impresses with its compact size and is designed for mobile use, while it is splash-proof, which also enables outdoor use. A large memory is integrated, which can be read out by the S-BTS256 software. A large number of display options are available for user-friendliness, and your own displays can be freely defined as desired. The very well adapted cosine diffuser in combination with the calibration traceable to national standards makes this device a precision measuring device. Optionally, the device can also be delivered with an integrated WiFi module.

In addition to measuring photometric parameters such as illuminance, color locus, color rendering index, dominant wavelength, etc., this measuring device also enables the measurement of flicker values. These evaluations are available as PAR measurement variables: PAR PPFD, DLI, R / FR as well as any definable irradiance values ​​by entering the spectral start and end point. It is also possible to define your own spectral effect functions, i.e. spectral effect functions can be transferred to the device with the supplied software S-BTS256. These are then evaluated directly by the device in mobile use.

The MSC15 is a handheld spectral measuring device with a microspectrometer unit. The MSC15 impresses with its intuitive operation via a color touchscreen display and its very compact dimensions. The diffuser offers very good cosine correction. Combined with a calibration that is traceable to national standards, this meter is the perfect choice for users who want to make accurate, routine measurements, the device displays PAR PPFD values ​​directly.

The CSS-45 is an interface-controlled, intelligent spectral detector with RS-485 and USB interfaces. 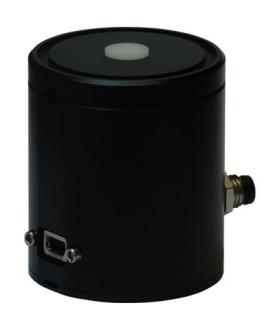 The CSS-45 offers the full measurement capabilities of the MSC15 spectral light meter in a rugged housing (with optional protective glass dome) that is fully under software control. It can be used in single and multi-detector configurations and the internal shutter is remotely controlled is therefore suitable for monitoring PAR levels in otherwise inaccessible places, as well as for use in connection with positioning devices, e.g. for displaying the area of ​​light distribution. An SDK is provided for software system developers, and the S-MSC15 can also be used.

LED lighting enables new possibilities in the control of the spectral composition of the light, which can be used to control the growth rate, shape and flowering of a plant. Therefore, modern PAR measuring devices have to be much more than just an integral measuring system. Spectrometers are needed to determine the various spectral weighting functions required. This variety of functions can no longer be realized with simple filter + photodetector combinations. PAR measuring devices should also allow mobile use and must at least be splash-proof, as most of their use is either outdoors or in greenhouses. The ability to directly measure typical PAR measured values ​​such as PAR PPFD, the DLI and the R / FR ratio is advantageous here. The BTS256-EF developed by Gigahertz-Optik GmbH supports all these functions and also impresses with its user-friendliness and its powerful S-BTS256 user software, which can even be used to define and measure user-defined weighting functions. The inexpensive and user-friendly MSC15 is perfect for routine PAR measurements and the CSS-45 is ideal for measurements in remote and inaccessible places, for example.

[3] W.S. Combs, The measurement and prediction of irradiances available for photosynthesis by phytoplankton in lakes, Ph.D. Thesis University of Minnesota, Limnology 1977.