What is a deep seated playmaker

Manchester.Wayne Rooney is a world star in football: at Manchester United, one of the best clubs in the world, he is the outstanding player. But his role in world football is often little appreciated - first Christiano Ronaldo and now Lionel Messi stole the spotlight as the world's best footballer. In fact, Rooney is arguably one of the most complete players in the world, if not the most complete. He combines the risk of goal, technique and bite in the game against the ball like no other. He has no outstanding weaknesses. Both in defensive work and in the game overview, he has continuously improved in recent years.

Rooney's transformation from striker to playmaker

The English superstar became more and more central due to his performances for the "Red Devils". Over the past two years we have seen the role of Rooney retreat more and more. Due to his good skills as a ball distributor, he initially let himself fall back more and more often from the center of the storm in order to shape the game from a lower position. Last season this culminated with a sometimes congenial partnership with Hernandez: Rooney got the ball between the opposing defensive rows and played interface passes on the fast-paced Mexican or on the outside.

In the first few games of the new season, Rooney did not act as a classic striker, but as an attacking playmaker. Most recently, his game shifted even further back: After the red card against Evans in the Manchester derby, he acted centrally in front of the defense. Against Otelul Galati, Sir Alex Ferguson sent him onto the field for the first time from the start in the "six" position. Specifically, this meant that Rooney took on the role of a deep-seated playmaker. From the control center, he distributed the balls, initiated counter-attacks or slowed down the pace if necessary. Together with Anderson he took care of the midfield center both offensively and defensively.

Conclusion: Rooney performed the role as a low-lying ball distributor with flying colors. He played 98 passes, 90% of which made it through. His statistics read even better for long balls: of 24 long passes played, 18 arrived - 75 percent. That's a very good number, especially when you consider that Rooney played a lot of vertical passes to the flanks. His overview of the game has always been one of his strengths, and in the low position his passing strength comes into play even more. It was also impressive how he acted calmly even in difficult situations. In the second half, when Galati mobilized all his strength after a 1-0 deficit and chased United all over the place, he kept calm even under the greatest pressure. Even against two or three opponents, he made room for himself with a technically strong turn of the body, in order to create space with a clever shift in the game. His years of experience as a striker who had to create opportunities in a confined space shimmered through here.

In a United team that looked nervous for much of the game, he was the organizing element. That should please Ferguson in particular. The positions in the central midfield are currently one of his biggest construction sites. Regardless of whether United appear with a 4-4-2 and a 4-2-3-1, they always played with two players in front of the defense. At the beginning of the season, the Cleverley / Anderson duo convinced. Both are very dynamic types of players who prefer to attack in the opposing half. United was able to generate so much pressure and just push weaker opponents in behind. However, neither is a classic, low-lying ball distributor.

The fact that United desperately needs such a player has become increasingly clear over the last few days of the match. Especially with the historic defeat against city rivals Manchester City, there was no organizing hand in the headquarters. Ferguson may not have tasted the performance of Anderson and Fletcher in that game. Rooney could be an attempt to fill this gap. The alternatives are not numerous. Apparently no replacement has yet been found for Paul Scholes, who before the end of his career embodied this position like no other in the world. 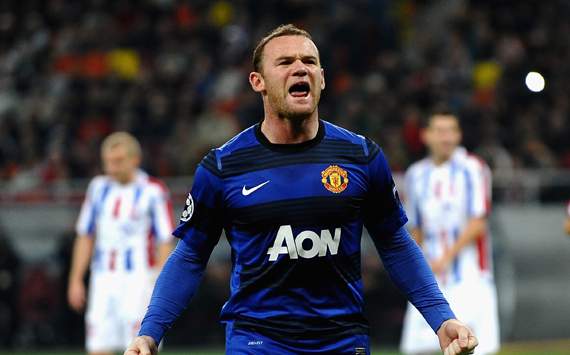 Rooney has everything a deep-seated playmaker needs. His performance in the Champions League match was formidable, even if in the first game over 90 minutes in this position he still showed slight orientation difficulties in some situations. Ferguson might want to use it here more often. The only question is which player could appear at his side. The most natural would be the combination with a dynamic type of player who wins a lot of balls. Anderson, actually quite strong, did not make the best impression against Galati, played many poor passes and lost a few tackles. It would be interesting to see how Rooney harmonizes with the ball winner Fletcher, or with the slightly more offensive Cleverley.

No matter with which partner, it should not have been his last appearance in the central midfield. Rooney could add another note to his outstanding flexibility - he can act as a striker, winger or attacking midfielder. His performance in the new role was never unfamiliar; rather, the audience wondered why he hadn't played so deeply so much more often. At least now it becomes clear what a complete player type Rooney is - most likely the most complete on this planet.