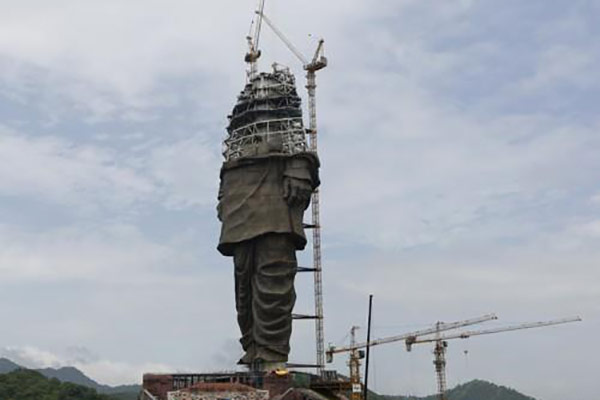 India is building the tallest statue in the world in the state of Gujarat. The monument to the politician and resistance fighter Sardar Vallabhbhai Patel, which is currently under construction, will be twice as high as the Statue of Liberty in New York City when it is completed. At 182 meters, it even exceeds Laykun Setkyar in Myanmar, which, with a total height of 129 meters, is currently the tallest statue in the world. Construction work began in 2013 and should be completed by the end of October, according to AFP.

Sardar Vallabhbahi Patel is one of the founding fathers of modern India. At the side of Mahatma Gandhi and Jawaharlal Nehru, Patel fought for India's independence from Great Britain. Under the first Prime Minister Nehru, he held the office of Minister of the Interior and Vice Prime Minister. Patel made a major contribution to uniting the subcontinent, divided into conflicting parties and clans, under the flag of the Union. According to historians, the freedom fighter followed a more nationalistic course than Nehru and Gandhi.

With its perpetuation, Prime Minister Narendra Modi apparently wants to unite the nationalists in the country with a view to the parliamentary elections next year. Modi said in 2013 in the office of the head of government of Gujarat that every Indian regrets that Sardar Patel did not become India's first prime minister. Modi belongs to the Hindu nationalist party Bharatiya Janata. The Congress Party led by Rahul Gandhi, on the other hand, is considered to be socially liberal and secular.

The construction of a 212 meter high statue with the image of King Shivaji Maharaj in Mumbai, planned for 2021, is in the same context. Shivaji Maharaj was the most important leader of the Marathas active in central and northern India in the 17th century. He is considered a successful Hindu leader in the fight against the Muslim Mughal empire.