REM is the deepest sleep

Stages of sleep - how sleep works

An electroencephalogram - EEG for short - in the sleep laboratory can show which phase the sleeper is in. The brain waves are measured using electrodes:

When awake, the line is flat and shaky. Many nerves are active independently of one another and communicate criss-cross with one another.

During sleep, the EEG looks different in characteristic ways:

When you go to sleep, the EEG line calms down a bit, it is flatter and less jagged. Eventually man falls into a light sleep.

These two phases are the easiest phases of sleep. Breath and heartbeat become calmer, the muscles relax more and more. In phase two, body temperature drops and eye movement stops

Deep sleep begins after 20 to 30 minutes. Here the EEG curve looks completely different. There are calm wave patterns with deep valleys. Phases three and four only differ in the depth of the waves.

Obviously, what you have learned is memorized in these phases. The first deep sleep phase of the night is the longest. It takes about an hour. The subsequent deep sleep phases, interrupted by dream or REM phases, shorten more and more in the morning.

In deep sleep, the heartbeat and breathing rate are lower than in the other phases of sleep. It is sometimes difficult to wake the sleeper. If that does happen, the person often still has a somewhat "foggy" feeling in their head for a while and their mental performance is slightly restricted for half an hour to an hour.

The deep sleep phase is necessary so that you feel fresh and rested the next morning. During this period, the body secretes growth hormones, which in adults trigger the regeneration of body cells and strengthen the immune system.

It is also assumed that deep sleep is particularly important for physical recovery: the muscles are relaxed, blood pressure and circulation drop, and the level of the stress hormone cortisol is lowest in this phase.

Each deep sleep phase is followed by a dream phase, the so-called REM phase. REM stands for "Rapid Eye Movement", because during this phase the eyeballs roll and twitch behind the closed lids.

You enter the first REM phase an average of 90 minutes after falling asleep. In this phase, the EEG is similar to the waking state, because action films are played inside the head. Those who wake up in this phase can usually vividly remember their dreams.

In this phase, the brain stem prevents the body from acting out the dream movements and possibly injuring itself. The muscles are paralyzed, only the limbs twitch and sometimes fidget.

This condition can also be found in nightmares - there is danger and yet one cannot move. How active the REM phase is is also reflected in the pulse, blood pressure and energy consumption - they are all almost as high as in an awake person. 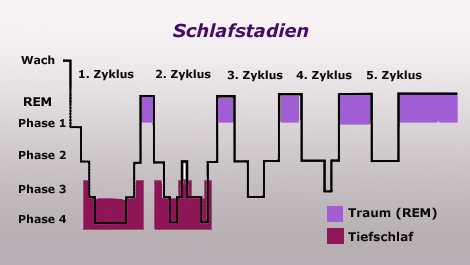 The person goes through this alternation between deep sleep and REM phase four to six times every night, whereby the first REM phase usually lasts only ten minutes, the last up to an hour. The different stages of sleep can even be observed in the unborn child.

In the last third of sleep, the body is already getting ready for the next day: it releases larger amounts of the stress hormone cortisol. About an hour before waking up, the sleeper slides back into a light twilight sleep, similar to when falling asleep.