“Whatever it takes” must now also apply to fiscal policy

The Fed, Bank of England and the ECB are doing all they can to counter a new liquidity and banking crisis. But their even more generous measures do not currently manage to calm the situation on the stock and commodity markets, probably also because they document the crisis. Anyway, what use is it if the table is well set in terms of monetary policy, but consumers and companies are not hungry? The longer there are no globally coordinated government stimulus measures, the sooner a small recession will turn into a large recession, which will then become more and more difficult to combat. In principle, the virus only loses its fatal effect on the real economy and the financial economy when - as doctors say - the population is “infected” and immunity also sets in with regard to economic uncertainty.

The world economy in the headlock of the pandemic

The corona virus has shifted its focus from Asia to Europe. While new infections in China are on the decline and Beijing is taking care of the economic wounds that have been hit, the situation in Italy and generally in European countries is worsening. America is only at the beginning of the epidemic. This year the growth of the world economy is likely to fall back to 1.5 percent. In 2019 it was still three percent, although the trade war was raging. The economic expectations for the next six months determined by the financial data provider Sentix show a sobering picture for all regions. 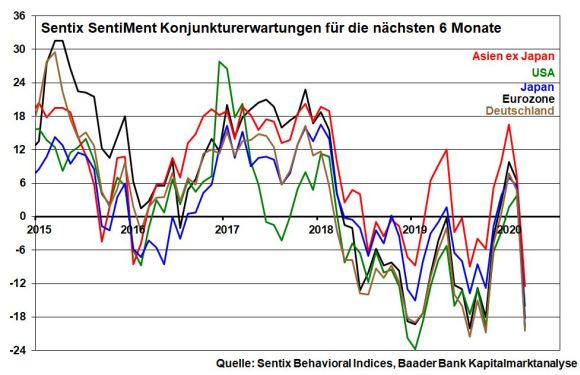 Now just not another financial crisis

The sharpest drop in oil prices since the Gulf War in 1991 is seen as evidence of a global economic slump. But the reason lies primarily in the family quarrel in the oil cartel. Since Russia does not want to support production cuts, Saudi Arabia will take revenge from April 1st with massive increases in subsidies and price cuts in order to compete with Russia for market share. Other OPEC countries will follow.

The cheap oil is a global economic stimulus program. In the cyclical chemical, automotive, mechanical engineering and steel industries in particular, demand-side profit losses are cushioned, at least in terms of costs. And consumers have more purchasing power.

But the imbalances in energy companies are unmistakable. US fracking companies are threatened with refinancing bottlenecks, whose investment boom is based on high debt and which on average only work profitably from oil prices above 40 US dollars. The yields on US corporate bonds from the high-yield sector - the energy sector accounts for around 14 percent - are continuing to rise, thus signaling increased credit default risks. 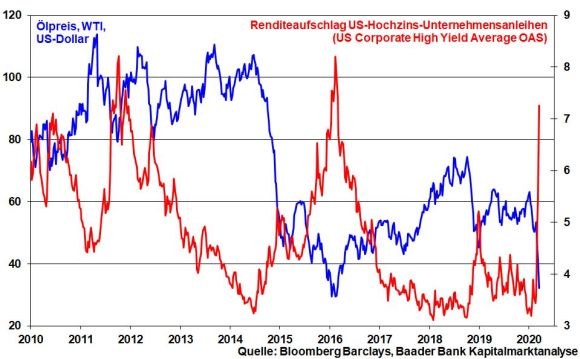 A wave of bankruptcies among energy companies, closely linked industrial companies and other sectors already affected by the Corona crisis such as the travel and airline industry with a negative impact on banks and in the event of a crisis of confidence such as after the Lehman bankruptcy is the horror scenario of the financial markets. 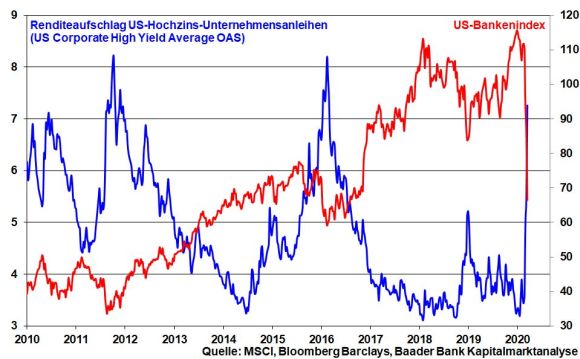 The Fed is forced to go on the offensive

In order to nip in the bud tensions in the US interbank market due to a lack of liquidity and ultimately a financial crisis caused by the drying up of the US money market, the Fed has expanded its short-term financial injections. At their peak, these were three times as high as they were at the time of the 2008 financial crisis, at around 170 billion US dollars. 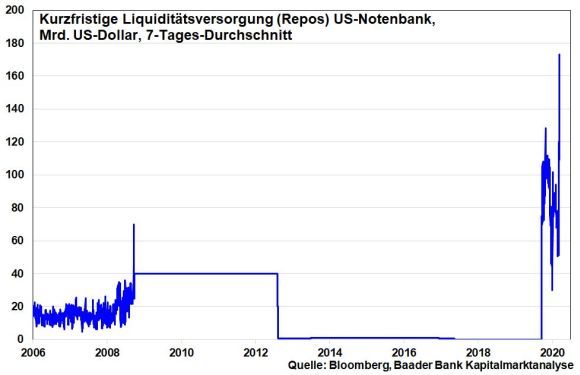 In view of the fact that, according to the Federal Reserve Bank of New York, the probability of a recession has risen to over 30 percent, nothing stands in the way of further rate cuts by the US Federal Reserve towards zero. 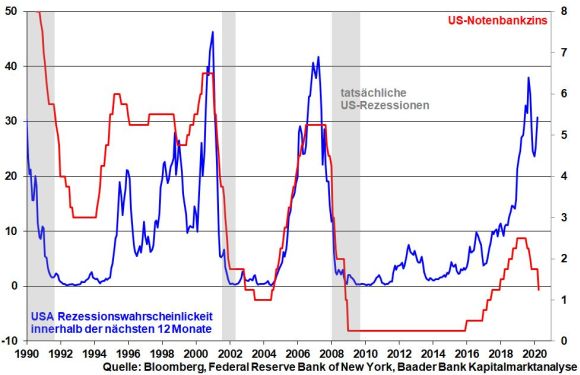 The reason for this is not least the deflationary effect of the slump in oil prices. American price increase expectations are at an all-time low. 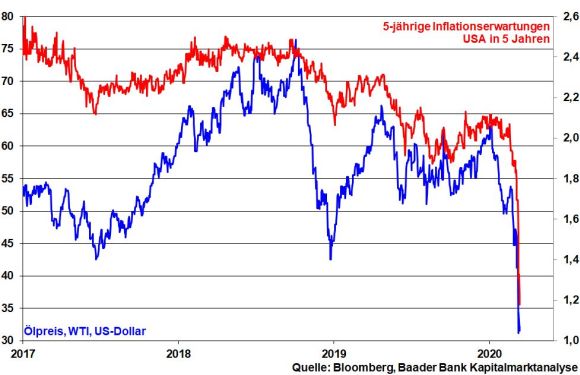 Last but not least, it prevents an excessive appreciation of the US dollar, especially against the currencies of oil-producing emerging countries. They should be able to continue to meet their payment obligations from their debt listed in US dollars as undamaged as possible. 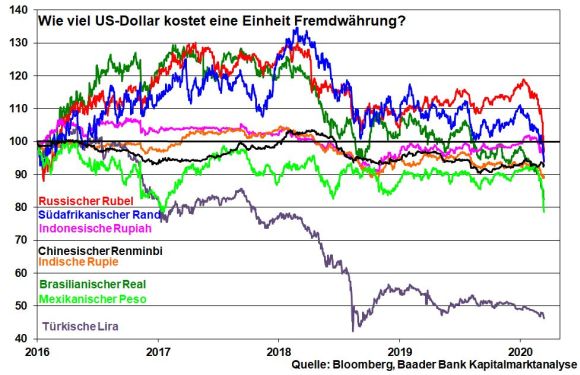 Because if oil and gas producing countries threatened to underfunding through weak energy prices, their petrodollar sovereign wealth funds would also have to cash in with American financial investments. After all, there are high book profits on US Treasuries. In order to avert possible increases in yields, there is a powerful argument for the Fed to also resume its quantitative easing. Indeed, to avert “extremely unusual disruptions”, the Fed plans to significantly expand its purchases of government bonds. That would then make it easier for the US to borrow again. A rogue who thinks badly. 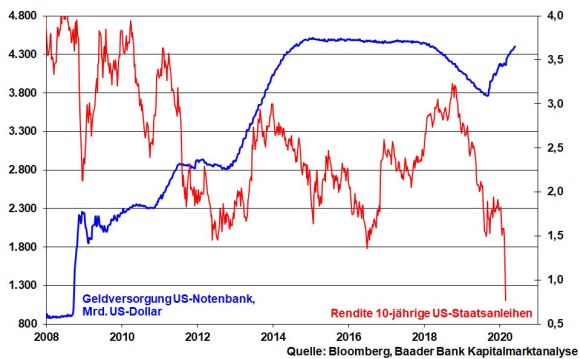 The ECB can pull on the rope, but not push the rope

The ECB is countering the virus shock for the euro zone with new long-term loans to prevent a credit crunch for companies. In this way, banks will de facto fulfill every liquidity requirement so that they can support medium-sized companies in particular, which have been badly affected by the virus. The ECB will also make additional bond purchases of over 120 billion euros by the end of the year. In doing so, it will buy up the majority of corporate bonds in order to counter the recent surge in yields and credit default premiums on European corporate bonds.

Graphic of the week 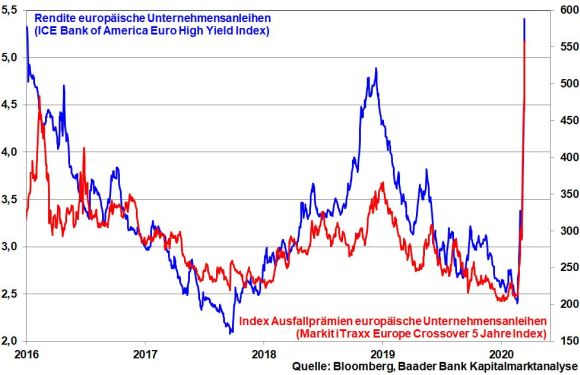 In doing so, it will not be able to avoid taking care of government bonds, e.g. to secure the lowest possible returns for Italy by financing government stimulus packages of over 25 billion euros.

Unfortunately, a faux pas happened to Ms. Lagarde at the press conference after the ECB meeting on March 12th. She said "We are not here to minimize the risk premiums for Italy". This is a nasty, indeed unforgivable, beginner's mistake. The reaction on the Italian bond market, with spreading effects on Spain and France, was not long in coming. Anyone who can count to three on the financial markets knows that the ECB can no longer get out of its rescue number for countries like Italy. Otherwise, the next, even more fatal debt crisis is just around the corner. The ECB President should not allow herself such a bad day again. 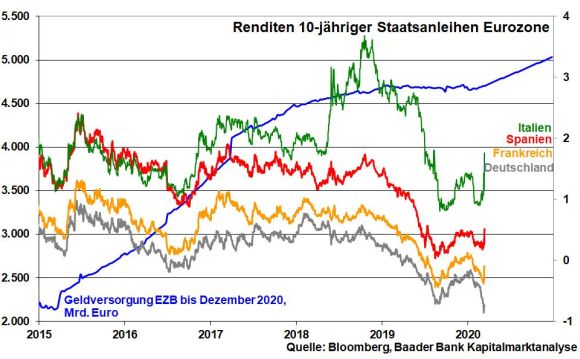 ECB boss Lagarde admits that her already capped growth prospects (2020 0.8 instead of 1.1 percent; 2021 1.3 instead of 1.4 and 2022 unchanged 1.4 percent) are still too optimistic in view of the worsening virus crisis. In view of the lack of a blueprint for the effects of the corona virus, the ECB is still leaving its inflation forecasts unchanged (2020 1.1 percent; 2021 1.4 percent and 2022 1.6 percent). But because of the collapse in oil prices alone, Lagarde expects a significant weakness in inflation, which it wants to counter with the greatest possible flexibility. 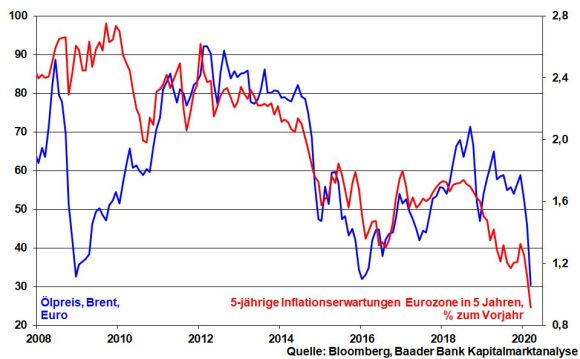 The ECB cannot do it alone: ​​now it's your turn!

Ms. Lagarde made it very clear that the ECB is at the end of its game and can no longer pull the chestnuts out of the economic fire for the euro countries. Indeed, it has shot its interest rate powder. Now it is the turn of the other, the fiscal side, to combat the unprecedented viral shock on the supply and demand side. In this respect, the criticism of the ECB about allegedly insufficient measures in view of its longstanding helper syndrome is not justified.

An EU aid fund worth 25 billion euros is really just a drop in the ocean when you consider that the UK alone is putting together an economic stimulus package worth 30 billion pounds. And the individual states can also do a lot more so that the mosquito of an initial dip in the economy does not turn into a trampling recessive elephant. Every wait exacerbates the crisis. Germany has a surplus in the national budget and can borrow at historically most favorable interest rates. So what speaks against rapid tax cuts, consumer premiums and other infrastructure stimulus measures that are suitable for at least mitigating or reducing economic uncertainty and location deficits until the virus crisis is resolved? Perseverance alone is pointless. One should have learned from the sharp recession in the wake of the 2008 financial crisis. In this context, one must at the same time liberate the economy from absurd bureaucratic and purely ideologically tinged maneuvering. The crisis is always an opportunity.

Market situation - the bears are still in charge

Accelerated by the "hysteria departments" on the financial markets, obligations to make additional payments on the commodity futures markets ensure further share sales. These are promoted in particular via the increasingly extensive passive investment collection points such as ETFs. The rest is done by sales signals that have no mercy on automated algorithms.

Donald Trump causes particular irritation. He speaks of a "foreign virus" and instinctively imposes an entry ban on Europe - with the exception of its ally Great Britain - which also has a massive impact on US companies and their share prices (e.g. airlines). In addition, he remains details of a grandly announced Guilty of economic stimulus program. In doing so, he damages confidence in America as a pillar of the global economy. Since the US president fails to convince the markets that he can contain the economic damage caused by the pandemic, he is also reducing the chances of his re-election Moderate Democratic President Joe Biden can live Corporate America well in contrast to Democratic Socialist Bernie Sanders.There is an alternative.

The bad news will last for now. One has to wait until the populations in the west are “thoroughly infected” so that the number of cured corona cases exceeds the number of new infections and immunizations take place, which then turn the economic mood upwards again. A minor mood in the global economy is expected in the first half of 2020. From today's perspective, an improvement is to be expected in the second half of the year, but the stock market will price this in early.

After all, China's economic stabilization is proceeding. Among other things, air pollution in Shanghai is again above average and signals a gradual normalization of industrial production. According to Beijing, capacities should be at least 90 percent full again by the end of March.

Sentiment and chart technique DAX - The search for a new equilibrium

Equity investors do not expect the crisis to ease, despite the fastest and most intense crash of all time. The Market Risk Indicator from Bank of America Merrill Lynch measures expectations on the futures market with regard to price fluctuations in the global equity, currency and commodity markets. For values ​​above zero, it indicates increasing market risks and for values ​​below that, it indicates risk relaxation. If the value was around minus one at the beginning of the year, it has currently risen to 1.18 and thus to the highest level since the end of 2009. 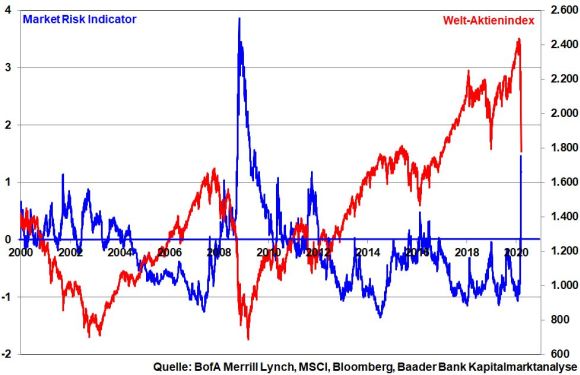 After all, the share of optimists minus the share of pessimists in the US stock market is below the first standard deviation and underlines the oversold situation as a counter-indicator. As soon as the flood of negative news subsides, investors will cautiously feel their way back to the stock markets. 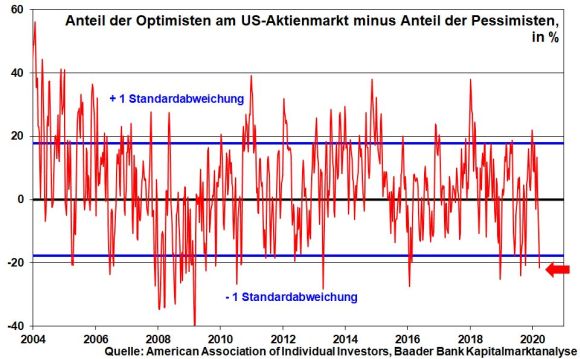 In the US, the real estate sector is stable according to construction starts and permits. However, the corona crisis is gradually striking industrial production and retail sales. The drop in the Philadelphia Fed's purchasing managers' index signals further sharper economic cuts. Further rate cuts by the Fed by at least 50 basis points are expected.

In the eurozone, there will be slack inflation in February and, according to ZEW economic expectations, there is initially no hope of easing in Germany.