Diabetes mellitus, also known colloquially as diabetes, has long assumed epidemic proportions in industrialized countries. The number of people suffering from diabetes literally exploded from 108 million to 422 million between 1980 and 2014 [23]. The function of the hormone insulin is central to diabetes: insulin is used to stimulate body cells to absorb glucose from the blood and to lower the blood sugar level that has risen after a meal.

At Type 1 diabetes Insulin is no longer produced due to the destruction of the insulin-producing cells in the pancreas. In this case, insulin must therefore be supplied from the outside.

Type 2 diabetes is by far the most common form of diabetes. In contrast to type 1 diabetes, insulin is usually sufficient in type 2, but it cannot work properly at its target location, the cell membranes. In this case, one speaks of insulin resistance, which is also a precursor of type 2 diabetes. As long as the pancreas can compensate for the problem through increased insulin production, this preliminary stage remains. Type 2 diabetes is when the pancreas can no longer compensate for this and the amount of insulin produced is no longer sufficient to control the blood sugar level.

There is consensus on this in numerous studies: a vegetarian or vegan diet protects against the development of type 2 diabetes.

Some large comparative studies (so-called prospective cohort studies) show a reduced incidence of diabetes in vegetarian and vegan diets. These studies compare large numbers (10,000 to over 500,000) of people over many years or decades and measure the influence of diet on disease incidence and mortality. Influencing factors such as age, gender, social status, sports behavior, alcohol consumption or smoking are recorded and statistically removed so that the nutrition factor can be measured as accurately as possible. These large studies include the Adventist Health Study 2 with 96,000 people, the EPIC study with 521,000 people, the Nurses' Health Study 1-3 with 116,000 nurses and the Health Professionals Follow-Up Study with over 50,000 men from the health sector [1 , 11]. The Adventist Health Studies, over a period of 17 years, showed that people who ate meat at least once a week were 74% more likely to have diabetes than people who were vegetarian [12]. 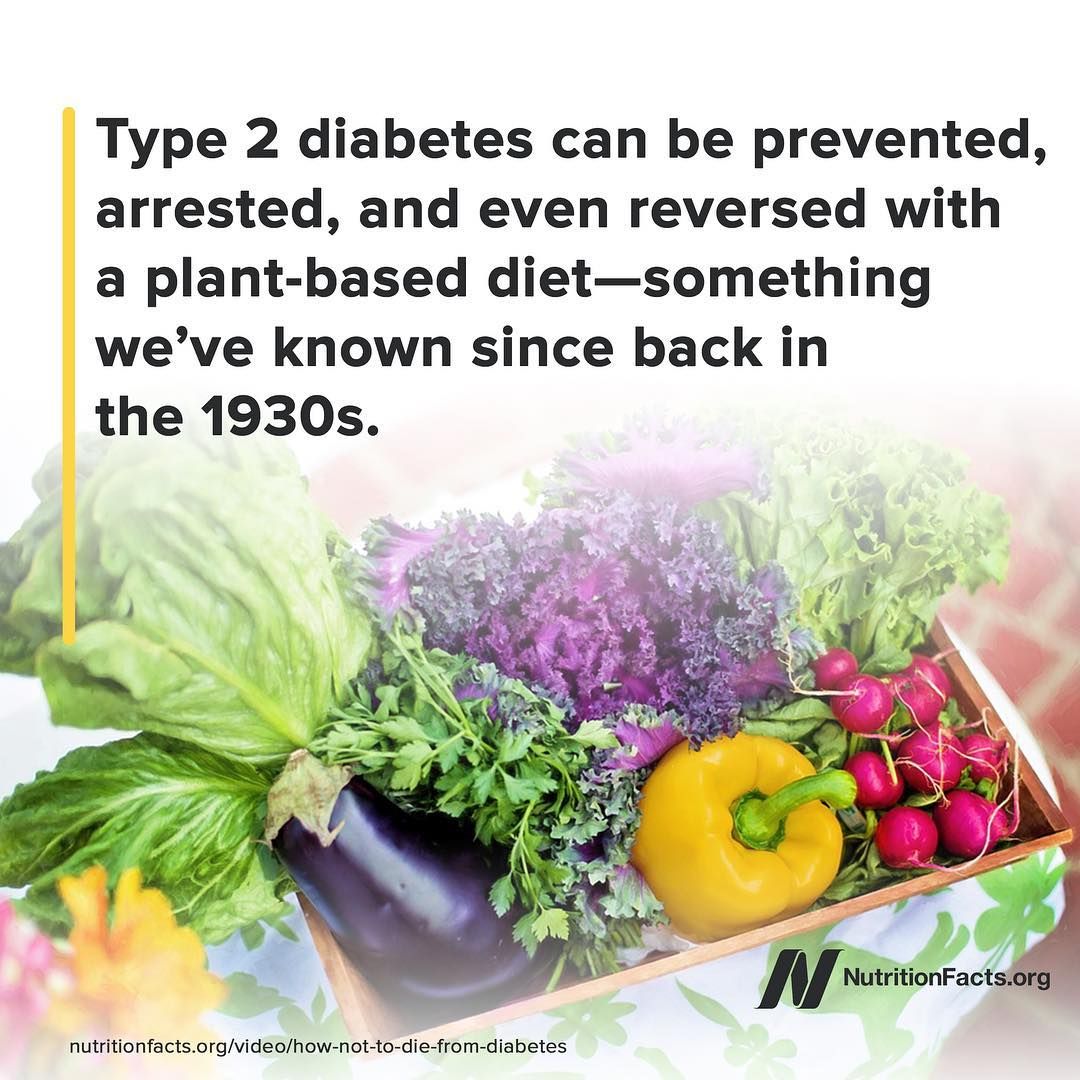 "Type 2 diabetes can be avoided, stopped or even reversed through a plant-based diet - this knowledge goes back to the 1930s"

Studies indicate that an increased consumption of red meat and whole milk products is linked to insulin resistance and thus plays a negative role in diabetes, and that avoiding meat and milk has a preventive effect against diabetes [26, 10]. On the question of whether milk plays a role in the development of type 2 diabetes, there are studies that see no connection. Nevertheless, there are indications that giving up cow's milk can reduce the occurrence of metabolic syndrome and insulin resistance, and ultimately also the risk of developing type 2 diabetes, especially if one generally avoids overeating by avoiding cow's milk [2, 24 , 25]. The administration of infant formula based on cow's milk before the age of 3 months or the high intake of cow's milk in childhood increases the risk of developing diabetes later, whereas breastfeeding only protects with breast milk [3]. An analysis of three studies on type 2 diabetes with 4,033,322 person-years (i.e. years that the study participants contribute to the study) - adjusted for BMI, age and lifestyle risk factors - found that a daily intake of 100 grams of unprocessed red Meat increases the risk of type 2 diabetes by 19% and a daily intake of 50 grams of processed red meat by as much as 51% [1].

Diabetes is popularly known as “diabetes”. This is justified insofar as the body can no longer cope with the blood sugar in diabetes. Sugar, more precisely glucose, is a problem with existing diabetes because it can no longer be broken down. But does sugar also trigger type 2 diabetes? The correlation of the consumption of meat and other animal products with the occurrence of type 2 diabetes would in no way explain this, because these animal products contain hardly any sugar, but often a lot of fat, especially saturated fatty acids. Indeed, there is strong evidence that the triggers for type 2 diabetes are to be found in saturated fat [13, 20] and that the causal factor here is much more of a fat disease than a diabetes disease.

Something remarkable was already established in the 1930s: if a group of young, healthy people were given a high-fat diet, the breakdown of blood sugar was inhibited within 2 days. In a comparison group with a high-carbohydrate diet, the blood sugar level was only half as high after 2 days [4, 5]. It was not until 70 years later that this surprising mechanism was better understood, which works as follows: Blood sugar needs an invitation to enter our cells. And that invitation is insulin. Insulin is the key that opens the door for sugar to move from our blood to the (muscle) cell. When insulin binds to the insulin receptor, an enzyme reaction enables glucose to enter the cell. However, free fatty acids prevent this transport of glucose [6] and can lead to insulin resistance in the muscle cells [9]. In this case, the key is insulin, but fat has stuck the lock, the glucose cannot get into the cells and remains in the blood. Studies show that the removal of glucose is inhibited for up to two hours after a high-fat meal [7, 8].

Whether special vegan diets can reverse and cure insulin resistance and type 2 diabetes is a controversial thesis. However, some scientific publications show very positive results.

A randomized controlled clinical trial in 2018 looked at obese people. The group that followed a plant-based diet showed not only significantly reduced measurement indicators for insulin resistance but also weight loss after 16 weeks [15]. Furthermore, this study from 2018 showed that a reduced-fat plant-based diet after 16 weeks was able to significantly improve not only insulin sensitivity but also the function of the beta cells [16]. These studies looked at groups at risk for diabetes who had not yet developed the disease.

But even in people who were already ill there were very positive results in the treatment of type 2 diabetes with a vegetarian and especially with a vegan diet [17]. This is also confirmed by a 24-week study with 74 people with type 2 diabetes. A group with a reduced-calorie vegetarian diet was compared with a group with a conventional diet common to diabetes. The vegetarian group showed far greater improvements in terms of insulin sensitivity and body weight [18].

[11] Aune, D et al. (2009), Meat consumption and the risk of type 2 diabetes: a systematic review and meta-analysis of cohort studies, in: Diabetologia August 2009.