Is normal fear of dogs

Tips for fear of dogs

If a large, shaggy dog ​​comes towards us while walking on the path, we react with caution. With a phobia, however, a natural basic fear turns into an anxiety disorder. Cynophobia, that's what it is called in the case of dogs.

How do I recognize a dog phobia?

This manifests itself, for example, in sweaty hands, a racing heart and faster breathing, explains the psychologist Johannes Rother from the psychological center for fear, panic and phobias, Phobius. Also very typical of a dog phobia is the freezing when a dog comes near.

The dogs themselves don't seem to be interested in such a fear at first. They neither run away, nor do they come very close. But because dogs react to the behavior and gestures of a person, dog phobics should adhere to a few rules so that the dog does not follow them any further.

This includes breathing calmly and not screaming under any circumstances. In general, calm is the order of the day, because if you run away, the dog might think you want to play with him. It is best to look elsewhere, because if a dog is stared at, it could misunderstand it as a request for contact.

If the panic is great, it is of course difficult to rest. Therapy can then help deal with the fear. Among other things, calming and relaxation techniques are learned. The goal is to be able to live normal everyday life again. Because some people hardly even go out of the house in order not to meet a dog.

Often such an exaggerated fear stems from early childhood. Perhaps caregivers have passed on this fear or someone has been seen to be knocked over by a dog. According to Rother, a traumatic experience of its own like a dog bite is rather rare. 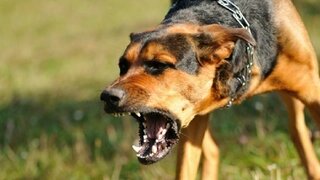 Unfortunately, not all dogs just want to "play", some also bite. Does it hit scary people more often?