How do I cook fennel

Prepare fennel: this is how you handle the tuber properly

You have to pay attention to this when buying

Fennel is in season from autumn to spring, but can easily be found in supermarkets all year round. You can tell whether the vegetables are fresh by looking at the fennel green. If the thin leaves are already withered and limp, it has probably been lying on the vegetable shelf for a while. The green stems should also be firm, as should the white tuber. If it already has dark discolorations or bruises, you better get another one. If the fennel passes your quality check, you can confidently send it home.

This is how you store fennel

The tuber feels most comfortable in a cool environment. The vegetable drawer in your fridge gives her just the right place to stay before you tackle her with the knife. It can easily be kept untouched for up to a week. If you have already cut it, you should use it in the next few days, otherwise it will dry out too much and become woody.

How you process fennel

1. Cut the green stems close to the tuber. In most recipes, the stalks are ignored afterwards, which is a shame. Because from the leaves to the stems to the tuber, the fennel is full of aroma. 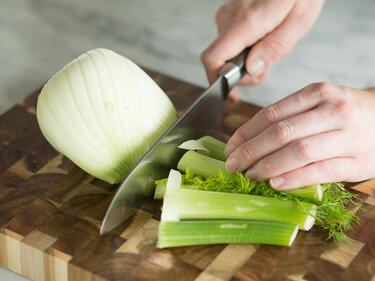 Like celery, the green stalks are particularly good for stews and strong vegetable broths. Cut into thin slices, they also give salads, sauces or soups the typical fennel taste.

If you pluck the feathery leaves on the stems and chop them, you have a fine spice to refine your dishes with the anise-like note. You can also give the prepared dishes a nice finish and use the leaves for garnishing.

2. Halve the fennel bulb. To do this, first cut off a bit of the tuber base and remove the hard root end. This way the tuber has a better stand and you can cut through it more easily and without wobbling. 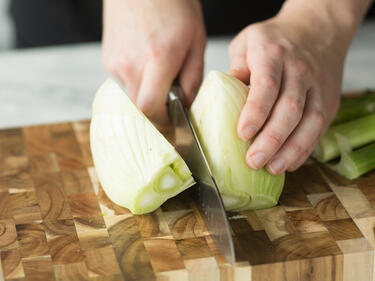 Halve the fennel bulb in the middle. 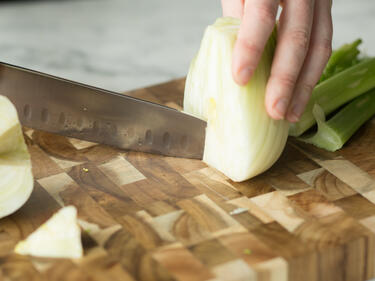 Remove the stalk in a wedge shape.

4. Cut the fennel. It is best to place the halved tuber on the cut surface so nothing can slip or wobble. Then you simply cut the tuber widthwise into crescents or lengthwise into fine slices.

Of course, you can cut fennel into any shape you want. Cut it e.g. into wedges for stews, small cubes for sauces or thin strips for salads.

Fennel is incredibly versatile. Its sweet aroma, which is reminiscent of aniseed and gives it its characteristic taste, tastes good with fish, meat, in salads, stews and casseroles, with pasta, in desserts and cocktails. As you can see, the list is long and could be continued. Fennel covers the entire range - whether savory or sweet. How many vegetables can say that about themselves?

To cook fennel is uncomplicated and not a challenge even for newcomers to fennel. With a little olive oil you can, for example, fry it in the pan and serve as a side dish, boil it until soft in broth and puree it into a soup or bake it in the oven. All options are open to you. No time to cook?

Prepare fennel raw is something for lovers of quick cuisine. After you've given him a quick shower under the tap and cut him into thin strips, slices, or cubes, he's ready to quench your growling stomach. Together with other vegetables, a few spices, lemon and vinegar, for example, it tastes great as a refreshing, crunchy salad.

In addition to celery, peppers and cucumber, fennel also looks good on your raw food plate and can be comfortably snacked in front of the TV. Simply cut off the root end of the onion-like tuber, loosen the tuber layers and dip into the herb quark.

Another tip: In order to save a little work and time, fennel can also be prepared well for a later date. When you've cleaned and cut it, simply cover it with water and store it in the refrigerator until you need it. If you don't want to use it until a few days later, you can easily freeze it in a storage jar or freezer bag.

5 recipe ideas that will completely convince you of fennel