To what extent is intelligence statistically hereditary 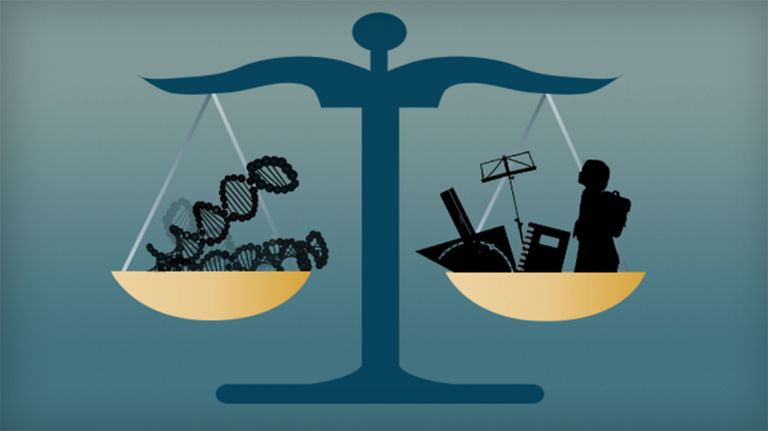 The genes shape our intelligence to a large extent. But the environment also has a say in the allocation of spiritual gifts that go through some changes in the course of life.

In 2010, scientists led by psychologist Olusola Adesope from Washington State University evaluated more than 60 studies on the subject of bilingualism and intelligence. Many studies have shown a positive effect of being bilingual. Executive skills in particular seem to benefit from this. In this way, people who speak two languages ​​can, on average, better control their attention. Researchers also suspect a cause: If you are using one language, you have to suppress the words of the other. Studies have also linked bilingualism to delayed onset of Alzheimer's disease. Bilingualism may help to build up what is known as a cognitive reserve, with the help of which one can remain cognitively fit for a few years despite the onset of neuropathological developments in the brain.

Feeding a baby by breastfeeding is said to boost intelligence. At least that's what it has been said over and over again in recent years. However, the study situation is not clear on closer inspection. A number of studies do indeed suggest a beneficial effect. However, if you take other statistical factors into account, such as the mother's intelligence or the style of upbringing, the effect decreases sharply or even disappears completely into thin air.

Hardly anyone will deny that people are of different intelligence. But when it comes to the question of how much is due to genes and how much is due to the environment, public tempers regularly boil. After all, the thought that genes could be our fate in matters of intelligence is not exactly pleasant for many.

In science, the age-old question is usually pursued with a cool head. With the help of twin studies, among other things, researchers try to differentiate the influence of genes and the environment. In such studies, researchers take advantage of the fact that identical twins are genetically almost 100 percent identical, while dizygoti only match 50 percent on average. The idea behind it is: If identical twins with comparable family relationships are more similar in terms of intelligence than dizygoti, it is due to their greater genetic similarity.

Twin studies have repeatedly come under criticism. But many psychologists and behavioral geneticists stick to them and their numbers - with good reason. "The reliability of twin studies is supported by the fact that they and adoption studies arrive at similar estimates despite different methods," says Jens Asendorpf from the Humboldt University in Berlin.

The estimates of the inheritance of intelligence, accepted by many psychologists and behavioral geneticists, are relatively consistent. In the last few decades they have ranged between 50 and 80 percent. However, you have to be aware of what that actually means. According to the psychologist Aljoscha Neubauer from the University of Graz, misunderstandings occur again and again in public (to what extent is intelligence hereditary?). “If you say, for example, that 50 percent of intelligence is hereditary and 50 percent is a result of the environment, many people think: 'If someone has an IQ of 110, 55 IQ points come from genes and 55 from the environment.'" Yes that is of course nonsense. You couldn't do the math like that.

Not the individual intelligence itself, but the intelligence differences measured in a group were to a certain percentage due to hereditary factors. Heredity therefore says nothing about the spiritual gifts of individuals. If the individuals in a group were exposed to absolutely the same environmental conditions from cradle to grave, all differences would of course be of a theoretical genetic nature. But in such a hypothetical case, could one single out a single person from the group and claim that their intelligence is 100 percent inherited? Hardly likely.

Apparently paradoxically, the influence of genes increases over the years - although we are actually exposed to environmental influences longer and longer as we get older. “This can be explained by the fact that the environment is increasingly adapted to one's own intelligence, at least in Western cultures,” explains Jens Asendorpf. “An intelligent child in a moderately intelligent family often does not receive sufficient support. Later, however, it can still catch up on the education that corresponds more closely to its genetic potential. "

In a certain sense, genes are the basic capital that each of us receives. In life it then depends on what you do with this capital. In our society, differences in intelligence are at least half of them genetically determined. But this also means that a large part can be explained by environmental influences. And ultimately, a high proportion of heredity does not say anything about whether and to what extent a certain characteristic such as intelligence changes in the course of development and whether it can be specifically influenced. Just think of your height. It is very genetically determined. Still, people have been getting taller for decades. A similar trend can also be seen for intelligence.

In 1984 two scientific articles were published that caused a stir in psychology. They came from the American political scientist James Flynn from the University of Otago in Dunedin, New Zealand. He finally systematically pursued a phenomenon that had actually been known for a long time: If you give a younger age group an IQ test that is decades old and standardized to an average of 100 points, the newer average is regularly higher. In order for the new test subjects to achieve an average of 100 points again, the level of difficulty has to be increased. Flynn's research came to the conclusion that the general IQ in the USA must have risen by almost 14 points in just two generations.

Numerous studies have now been able to prove the so-called Flynn effect: subsequent birth cohorts actually do better in intelligence tests than previous ones. The increase from generation to generation corresponds to around 0.2 to 0.4 IQ points per year. This phenomenon has been observed in a wide variety of countries, including developing countries. Flynn himself assumed that only the intelligence in the narrower sense of the IQ test had increased. So he did not believe that today we are, on the whole, significantly more intelligent than our ancestors.

What triggers this effect is in any case controversial. Since intelligence has grown so rapidly in the 20th century, the rather leisurely change in the gene pool is hardly an option. Researchers therefore suspect a number of environmental factors that could have a positive effect on each other: These include, for example, quantitatively and qualitatively improved (school) education and better nutrition.

Nutrients for the thinking center

In fact, nutrition plays an important role in our thinking center, especially in the early stages of life. Nutrients regulate the brain development of the offspring during pregnancy and immediately after birth. The developing brain is particularly susceptible to nutrient deficiencies between the 24th and 42nd week of pregnancy, writes neonatologist Michael Georgieff from the University of Minnesota in a review from 2007. Because during this time, the pace of structural changes such as the formation of synapses is extremely high. Nutrients such as zinc and iron are particularly important for brain development - iron, especially for the production of messenger substances and the covering of nerve fibers with myelin.

Intelligence can also be significantly promoted through continuous teaching over several years. Every school month brings an increase in cognitive performance, which corresponds to about half an IQ point, according to the psychologist and talent researcher Detlef Rost from the University of Marburg in his “Handbook of Intelligence”. This corresponds to an increase of four to five IQ points per school year. Higher heritable values ​​of intelligence and changeability are not mutually exclusive, writes Rost.

Indeed, intellectual performance goes through a number of changes over the course of life. From birth to adulthood it increases: stormily in the first months and years of life; then the pace gradually slows down until the growth almost completely comes to a standstill around the age of 20.

In old age, it goes downwards due to physiological factors. (The brain in its mature years). However, it is worth taking a closer look here. Our processing speed declines over the years. For example, we can no longer switch from one task to another so quickly or do two activities almost at the same time. But there is also good news: Certain aspects of intelligence, such as our language skills and knowledge, increase with appropriate practice. People can learn a new language even in old age.

So to a certain extent we have the fate of our intelligence in our own hands. Kind of reassuring.