What drives madness in smart people 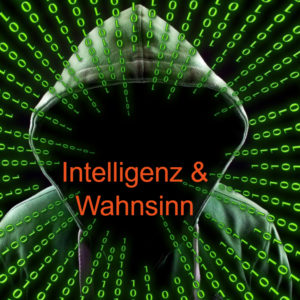 This is just one of many examples in which highly intelligent people put themselves in the service of insane idiots. The history books are full of it. Political strategies, well thought-out, pointed speeches, winding moves in high finance, manipulative campaigns, technical developments to maintain power and much more - the list is endless.

In all areas, behind the tragic successes of despots and power-hungry megalomaniacs, there are highly intelligent geniuses who advance their cause.

Speechwriters, filmmakers, songwriters, artists, physicists, strategists - entire armies of intelligent assistants are deployed when it comes to keeping dictators in power or enforcing the will of large corporations and influencers.

Whether it is the fine art of manipulating the masses or the technical development of weapons to secure power - there are always bright minds behind these machinations.

What drives these people? Why don't you use your oversized talent for the benefit of everyone?

There is a simple answer to that, and a slightly more complicated answer.

For one thing, the bad guys have more to lose and therefore pay better. So it's just what most contractors and workers do - they sell their labor in the best way possible.

Doing good often brings a lot of recognition and praise, but usually very little that you can pay with in the supermarket.

That is certainly one reason that motivates many to act unscrupulously. Greed or its constant companion, fear. In addition, there is the desire to feel important, or if not admired, then at least to be feared.

Whatever it is with the individual, it causes these highly intelligent people to do stupid things. Things that harm other people, that sometimes endanger society, sometimes the entire species, and sometimes the whole planet.

That is of course more than a single person can represent before God and himself. They would somehow manage to deal with God, but in front of their own self-image it will definitely be difficult. That is why the arms manufacturers talk about peacekeeping, deterrence and self-defense and completely ignore the fact that their developments must also be used, otherwise the company they work for will not exist for too long.

"It's about jobs." An extremely popular phrase that politicians and companies conjure up again and again when it comes to protective measures for people and the environment. “We are not allowed to saw off the branch we are sitting on,” they say, and keep silent about the fact that they are jeopardizing the existence of the entire tree.

Most of the time, that's enough to give people enough existential fear to choose the apparently lesser evil.

What could we as humanity achieve if we could combine all of these ingenious skills and knowledge into an alliance of positive development?

But that doesn't happen because these highly intelligent people often act just as stupidly as everyone else. You are just as driven by fear and greed as everyone else. Not everyone understands themselves to the same extent, but they are undeniably present.

In addition, the positive use of your own strength also includes the belief that you can make a difference and the self-confidence that you can shape things. Both are characteristics that have nothing to do with intelligence - on the contrary. Belief in yourself and trust in your own abilities and powers are highly irrational. They can rarely be justified logically.

It is much more logical to look at the overwhelming power of the prevailing conditions and to feel one's own impotence. That's the reality. You can't just turn a blind eye to it. You just have to make the best of it for yourself - like everyone else does, right?

In this respect, the geniuses act just like any average consumer. They submit and thereby become part of the machinery to which they feel at their mercy and on which they believe they are dependent. 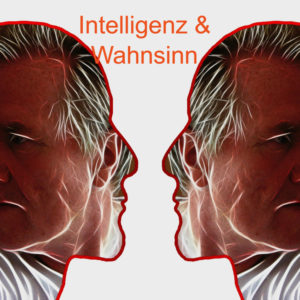 Now and then you hear and read about someone who has changed the world in a positive way. Such people are then admired in the best case, fought in the worst case and made bad - but only a few take them as an incentive for their own efforts. It's a shame, isn't it?

I'm sure most people could use their talents and abilities for the benefit of others and live well doing it themselves - it might take a little more creativity, but with the willingness to do just that, a way will open up.

That would have two consequences - the world would gradually become an even better place and at the same time the insane would be denied access to the resources of these people. A doubly positive effect, so to speak.

All that remains are a few exceptions, which combine genius and madness. They are still dangerous enough, but there are significantly fewer than those who have to tap into the intelligence of others.

What could we all move? ... I know - totally unrealistic and naive. But just as a mind game - what could we achieve for the individual, the community and the big picture? ...

All the best and
see you soon
your
Gerd Ziegler