How does injection molding work

Injection molding is a so-called discontinuous process. While the tool is cooled in most cases when processing thermoplastics, the processing of elastomers and thermosets requires the tool to be heated. This is essential to harden or vulcanize the injected material. 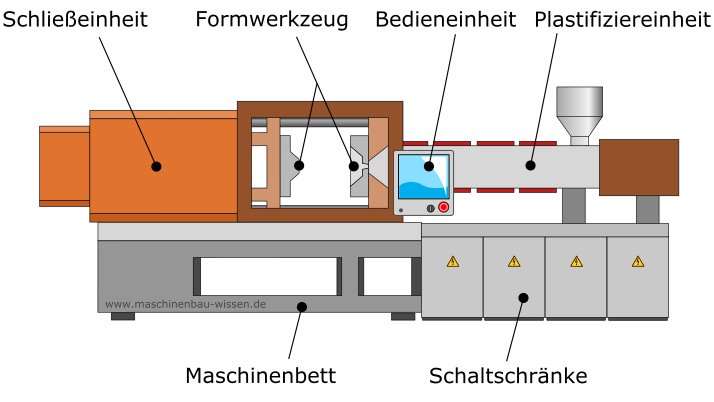 Structure of an injection molding machine 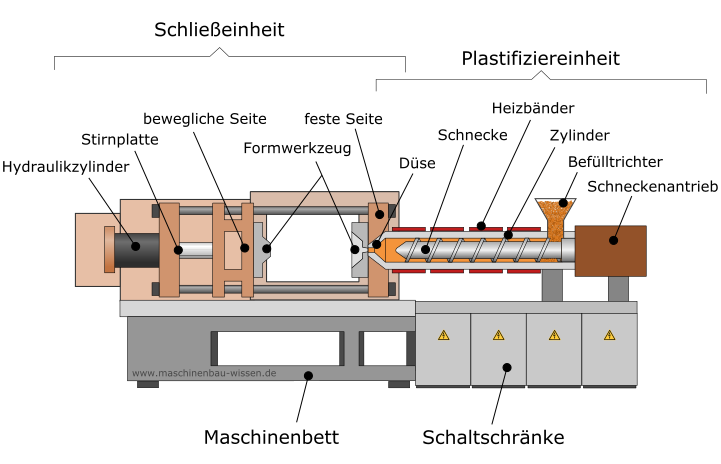 Structure of an injection molding machine in a sectional view

First, the thermoplastic material to be injected is poured into a rotating screw in the form of granules or powder via a funnel. The granulate is conveyed in the direction of the screw tip by the rotation. The so-called frictional heat is created by dividing and shearing the granulate, which together with the heating of the cylinder in which the screw rotates, ensures that the plastic granulate is melted.

In the further course of the process, the plastic melt accumulates at the screw tip, where the outlet nozzle is located, which is closed at this point in time. This creates pressure on the screw. As this can move axially, it unscrews itself, like a corkscrew, backwards out of the molten mass under this pressure. The backward movement of the screw is braked by a hydraulic cylinder or controlled electrically. This builds up dynamic pressure in the melt. Through this back pressure in connection with
As the screw rotates, the melt is compressed and homogenized.

The position of the screw is continuously measured during the entire process. As soon as an amount of material has accumulated in front of the nozzle that is sufficient for the volume of the workpiece to be manufactured, the rotation of the screw is stopped and the dosing process is ended. At the same time, the screw is actively or passively relieved in order to decompress the melt.

Injection represents the next step in the injection molding process. During this injection phase, the injection unit moves up to the clamping unit. It is pressed on with the nozzle and at the same time the screw is put under pressure on the back. This creates pressures between 500 and 2,000 bar, with the help of which the melt is pressed through the nozzle and the sprue or sprue system of the tool into its cavity. This is responsible for the shaping of the later workpiece. During this process, a so-called non-return valve prevents the melt from flowing back towards the feed hopper.

The primary goal during injection in the injection molding process is to ensure the most laminar flow behavior possible on the part of the melt. Where the melt in the injection mold touches the cooled mold wall, it is immediately cooled down and solidifies in place. This increases the pressure on the advancing melt, as the melt channel is tapered. The injection speed and the shear deformation also increase as a result, as a result of which the melt is deformed towards the edge at the front of the melt. Here the heat dissipation through the cooled mold wall and the heat supply through the shear heating are superimposed.

A shear rate is generated in the melt from the high injection speed, through which the melt can flow more easily into the tool. However, an always high injection speed should not be used. Because with an increased shear rate there is also an increased breakdown of molecules. The surface, appearance and orientation of the finished workpiece are decisively influenced in the injection phase.

The pressing down and cooling down

The next steps in the injection molding process are repressing and cooling. At 20 to 120 ° C, the tool is significantly cooler than the melt at 200 to 300 ° C. Therefore, the melt cools down in the mold and finally solidifies at the freezing point of the mass. During cooling, volume shrinkage takes place, which has a disadvantageous effect both on the dimensional accuracy and on the surface structure and quality of the workpiece. This shrinkage is at least partially compensated for by maintaining a reduced pressure even after the mold has been filled. This allows material to flow into the mold and compensate for the shrinkage that occurs there. It can continue to be pressed until the so-called sealing point is reached, at which the sprue solidifies.

When the pressing down is finished, the nozzle of the screw cylinder is closed and the dosing and plasticizing of the mass for the next workpiece can be started. In the meantime, the material in the mold continues to cool down until the liquid core of the molded part, the so-called core, has solidified. Then, in most cases, sufficient rigidity of the plastic is achieved for demolding the workpiece.

The injection unit can now be lifted from the clamping unit, since no more liquid plastic can escape from the sprue. This lifting is important in order to prevent the nozzle from "freezing" on the screw cylinder due to excessive heat transfer from the nozzle to the significantly cooler tool.

Demolding is the last step in the injection molding process. The ejector side of the tool opens. Pins penetrate the mold cavity and press the molded part out of the mold. It now either falls into a waiting container (bulk material) or is removed from the tool by suitable handling devices. These either store the molded part in an orderly manner or make it available for further processing directly.

The sprue must be removed from almost all molded parts. This is done either in a separate processing step or automatically during demolding. Sprueless injection molding is also possible. For this, hot runner systems must be used, which ensure that the sprue system always remains above the solidification temperature of the processed mass. The material in the sprue can then be used for the next molded part.
When demolding is complete, the mold closes and the process starts all over again.