What is special about the Hubble Telescope

The space telescope does not stand still: it races around the earth at eight kilometers per second. It therefore only takes 1.5 hours to circumnavigate it. Stably targeting a distant, tiny object in space from this frantic speed seems downright impossible. But Hubble uses a very simple basic principle of physics for its bearing. 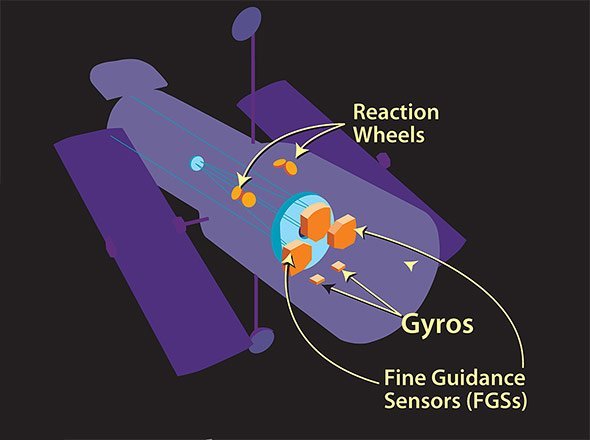 The Hubble telescope moves using a system of reaction wheels, gyroscopes, and its guidance system. © NASA, ESA, A. Feild and K. Cordes (STScI), and Lockheed Martin

Inertia wheels instead of jet propulsion

The space telescope, roughly the size of a bus, moves in orbit completely without a drive system. It has neither thrusters nor other maneuvering aids that function on the principle of recoil. Because their outgassing would obscure the telescope's field of view. Nevertheless, it is anything but immobile - on the contrary: Hubble can locate its target objects with an accuracy of 0.01 arcseconds and track them with a deviation of only 0.07 arcseconds over 24 hours. This corresponds to the aim of a laser with which one could hit a coin around 250 kilometers away.

To align with a target object, Hubble uses Newton's third law: actio equals reactio. Every action of force generates an equally strong, but oppositely directed force. In concrete terms, this means that the telescope rotates by changing the speed of four pairs of so-called inertia wheels. These six wheels, almost 60 centimeters in size, can rotate at up to 3,000 revolutions per minute. If they are slowed down or accelerated by electromagnets, this exerts a force on the telescope, which turns it in the opposite direction. Six gyroscopes constantly check the position in space. 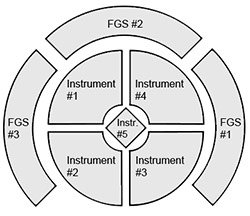 The guiding star gives the direction

The whole thing would be useless, however, if there weren't systems that tell the telescope where to turn and that precisely control this movement. Several sensors are involved in this task. First, a guide star is determined from a star database - a bright celestial object that is as close as possible to the target object. Three special cameras, the so-called fine guiding sensors (FGS), then look for this.

These sit in a ring around the rest of the instruments and capture the image of the guiding star. With the help of interferometry, they register whether this is exactly in the center of Hubble's field of view: Your signals are offset by a computer in such a way that a migration of the object from the center triggers a phase deviation in the signal. If this occurs, the computer gives the order to readjust the telescope.

Who can answer when?

The decision as to which object Hubble will target is made by a selection committee at the Space Telescope Science Institute (STScI) in Baltimore. Every year around 1,000 applications from scientists from all over the world are received there, of which around 200 are selected - the selection is not much different than with other large telescopes. 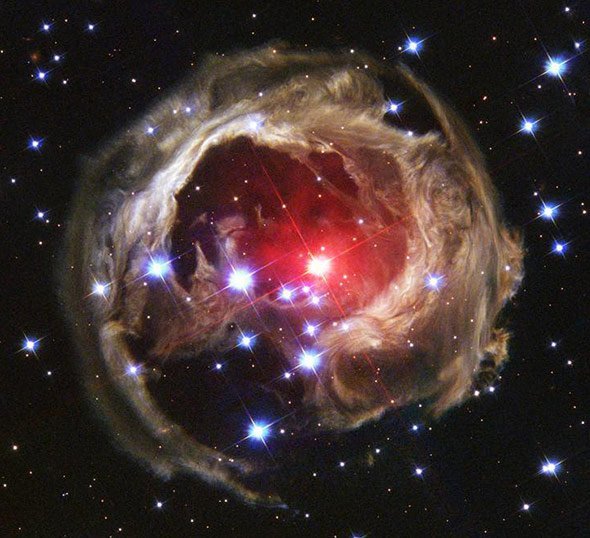 Since the red supergiant V838 Monocerotis exploded in a nova in January 2002, Hubble has been following the changes regularly. The light pulse of the explosion, which propagates at the speed of light, illuminates the dust cover in its surroundings. © NASA and The Hubble Heritage Team (AURA / STScI)

In addition to the importance of the question for astronomy and a well thought-out approach, criteria are also the question of why it has to be Hubble of all things for the research project. 15 percent of the observation time is allocated to European researchers and research groups - in exchange for the 15 percent participation of the European Space Agency ESA in the construction and operation of the telescope.

In addition, however, ten percent of Hubble's observation time is reserved for special tasks. The aim is to create the possibility of directing the telescope to target objects at very short notice and unbureaucratically - for example when a short-lived event such as a gamma ray burst or a supernova is registered. But also projects that take longer but benefit various areas of astronomy, such as the famous Hubble Deep Fields, are implemented in this reserve time.