What came after the baroque art

Many important works of art have not survived the centuries. The year of origin of the preserved works of art is often unclear. Fortunately, many buildings, especially many churches and cathedrals, have survived centuries and are still available today as vivid examples of the individual style epochs. 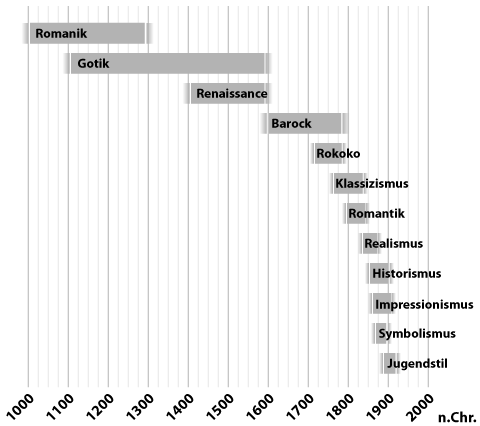 After the fall of the Roman Empire, around 500 years (early Middle Ages, the time of the migrations) had to pass before the first pan-European art style developed: From around the year 1000, Romanesque art appeared on the scene, named after ancient Roman art. As in antiquity, round arches, columns and bulky structures were very popular in the Romanesque ("round arch style"). The Speyer Cathedral (built from 1025) is an example of Romanesque art, which is also known as the pre-Gothic style.

Gothic art at that time was "modern art" that did not adhere to the conventions of antiquity and Romanesque. And so (from a later point of view) the derogatory term of Gothic came into being, derived from "gotico", the Italian word for "barbaric, strange".

During this time, warfare changed. The first firearms were developed (from 1324 at the latest) and mercenary armies became fashionable. As a result, structures, in which defensive capability was previously one of the most important properties, changed from massive fortifications to representative buildings that were supposed to demonstrate the size and power of their owners.

The Gothic style stands for striving upwards - now everything had to look as high as possible. In order to create the visual impression of height and power, upward-striving elements replaced the massive building mass. Pointed arches, which replace the round arches, were a popular stylistic device.

Examples of this are the Regensburg Cathedral (rebuilt from 1285) or the town hall in Lübeck. Construction on Cologne Cathedral also began in the 13th century. The renaissance that followed made the Gothic look old-fashioned, which is why many Gothic buildings were not completed until centuries later.

The Gothic, also known as the pointed arch style or the French style, was declared the German style in Goethe's work "Von Deutscher Baukunst".

Renaissance, French for "rebirth", means the rebirth of the ancient (Roman) style, which had already been adopted in the Romanesque era, but was then supplanted to a certain extent by the Gothic style. The Renaissance started in Italy (especially Florence), where the Gothic style could not prevail.

Greek scholars fled from the sinking Byzantium and ensured the revival of ancient ideas in Italy. Art and science regained their ancient status. It is the time of inventors, researchers, scholars and artists like da Vinci or Michelangelo. America is discovered, Gutenberg invents printing, Luther translates the Bible.

After the Middle Ages, when artists saw themselves as pure craftsmen and copied existing works, the renaissance (15th-16th centuries) made new creation more important, which made the artist himself more important.

The model for artists and architects in this style period is often nature from the point of view of man. Proportions, symmetry and harmony now become important. Well-proportioned portraits and lifelike landscapes are created.

The Heidelberg Castle and the Fugger Houses in Augsburg are examples of this style epoch. Construction of St. Peter's Basilica in Rome also began in the Renaissance, but was not completed until the Baroque.

As a term for the art of the 17th - 18th centuries, the term baroque initially had a derogatory meaning. In Romansh it stands for “bizarre” or “uneven”, after the originally Portuguese word barocco for an irregular pearl. The negative interpretation was not lost until the neo-baroque era within historicism.

In order to counter the sober appearance of Protestantism of this time, a sensual and opulent expression developed in art. The churches and palaces of the colonial rulers overseas and Holland became more lavish and lavish. Paintings, drawings and sculptures from the Baroque era increasingly show soft, flowing transitions, very painterly effects and artistic light-dark effects.

The main masters of the Baroque include the Roman Gian Lorenzo Bernini, the Flemish painter Peter Paul Rubens and the probably best-known painter of Holland, Rembrandt van Rijn.

In 18th century France, the architectural and decorative style of the Rococo emerged. The word is derived from the French rocaille (grotto and shell work) and indicates the exaggerated use of these patterns.

Rather than being described as a decorative style, the Rococo expresses itself in playful decorations and, above all, the renunciation of any symmetry. Light, delicate, sinuous lines and often tendril-shaped borders take the place of solid forms.

Official or religious buildings were hardly subject to the influence of the Rococo, but rather architecture and art in aristocratic circles. Famous examples of these are the interiors of the Brandenburg Palace Sanssouci and the Schönbrunn Palace in Austria.

A basic feature of the art of the 18th and 19th centuries is the strict rejection of the "ornamentalization" of the Rococo.
Confusion can arise from the fact that the term classicism is used in France for baroque art, but in German for the bourgeois counter-movement of the exaggerated ornamentation of the courtly rococo.

There was a return, if not a copy, of ancient Greek themes and forms. Aesthetic ideals became clearly defined structures in architecture and a reduction in the artistic means in sculpture and painting.

The use of basic geometric shapes such as triangles, squares, circles, spheres and pyramids was particularly suitable for the architecture of representative buildings such as churches, triumphal arches, city gates and museums.

In Germany, Berlin and Munich are considered the capitals of classicism. The Brandenburg Gate can be mentioned as an example. But also the Capitol, in the American capital Washington, was built in a classical style based on the European model.

The period of Romanticism is positioned roughly between the years 1790 and 1840. The art of this time emphasizes the fantastic, the emotional and a poeticization and romanticization of reality. It developed in response to the enlightenment and the strict forms of classicism.

No specific painting or construction technique can be assigned to the Romanesque era, rather the zeitgeist is expressed in the idea of ​​a new art and a new way of dealing with it. Nature, feeling and memory become the central motifs of the visual arts, architecture as well as literature, music and philosophy.

In architecture, one of the main goals of Romanticism is to harmoniously combine architecture and landscape. The tradition of the monument and the preservation of monuments was also shaped here. The greats of the German romantic arts include the painter Casper David Friedrichs and the poet Joseph von Eichendorff.

In realism in the middle of the 19th century, many painters and sculptors moved away from idealizing their motifs and increasingly chose a very factual and realistic representation.

Also in this epoch there are no characteristic painting or drawing techniques. In this context, the term realism must not be understood to mean any particularly real-looking or photo-realistic image.

Rather, under realism, imperfect, authentic realities and everyday things became popular topics in art and literature. Many famous works show secular and unadorned scenes from the daily life of the lower social classes.

In historicism, stylistic elements from the Baroque, Rococo, Romanesque and Renaissance styles were taken up and imitated. This use of the old styles was heralded as early as the 18th century and continued into the modern age of the early 20th century.

An indication and typical characteristic of historicism is the simultaneous appearance of different styles or stylistic elements in one work. Within historicism, a distinction is made between neo-Romanesque, neo-Gothic, neo-renaissance and neo-baroque and their mixtures.

The Berlin Reichstag building, for example, combines elements from neo-renaissance and neo-baroque. It was built in the years 1884-1894 in the style of historicism, with models from the High Renaissance and Baroque.

The name Impressionism as a style of art was formed at the end of the 19th century after an art exhibition in Paris. Among other things, Claude Monet, Pierre-Auguste Renoir and Paul Cezanne exhibited paintings with completely new painting techniques, visual languages ​​and motifs. This brought about a change in art that had far-reaching consequences, especially in painting.

Impressionism is characterized by capturing moments, moods and atmospheres. The subject matter and technical perfection were of secondary importance to the effect and composition of the works of art. Motifs are, for example, special lighting moods at a certain time of day. Therefore, painting was usually done quickly and intuitively, which often resulted in a loose, feathery or dabbing brush stroke.

Impressionist painting also had a great influence on photography, film and literature and was also instrumental in many subsequent art styles.

Symbolism emerged parallel to Impressionism, also in France around 1885. Often it was mystical and biblical themes that inspired the artists of this time to create works with special symbolism and a deeper reality.

Symbolism had its beginnings in literature - for many poets and lyricists, the natural and lifelike view of realism and impressionism was too commonplace and banal.
In the fine arts, the artists, the so-called symbolists, look for their motifs in mythology, fantastic dream worlds, strong emotional states and the world of the unconscious.

Famous representatives of symbolism are, for example, Edward Munch ("The Scream") and Paul Gaugin.

Decorative Art Nouveau was popular across Europe at the turn of the 20th century. Its origins lie in France, where it is known as Art Nouveau, and in the Anglo-Saxon area, here called Modern style. From there it spread throughout Europe in the last two decades of the 19th century.

The various European currents had two aspects in common: The motivation to create a modern and young art form instead of falling back on old models. Strongly driven by the “Arts and Crafts” movement, art and handicraft should also form a unit and be present and tangible in people's everyday lives.

The often floral, curved or geometric elements of Art Nouveau can often be found in everyday objects and furniture, sculptures, jewelry and glassware, but also in architecture, painting and sculpture.