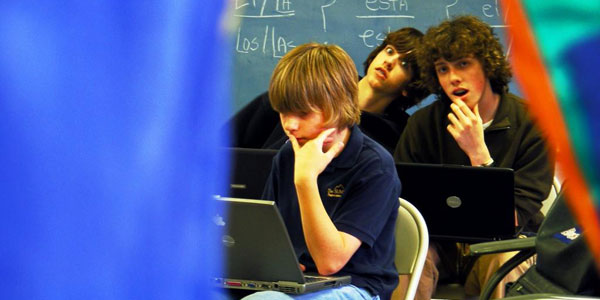 The 5th grade students are already sitting in their seats, their physics teacher Laura Brinkmann has already handed out the papers and is about to start class. 11-year-old Marco comes in slowly, deliberately. "I'm sorry," he apologizes. "First I overslept, then forgot my head in bed and then the drive of my jet was broken." Some students laugh at the joke, others roll their eyes in annoyance while the teacher sighs and enters the delay in the class register. And Marco has what he wants: attention.

Marco is a typical class clown. But what exactly is behind it? Are Class Clowns Really Funny? Mere troublemakers? Rebels in disguise? Or are some of them even gifted comedians who could earn a lot of money on a stage? Laura Brinkmann (33) knows the phenomenon well: She works as a teacher in a secondary school in northern Lower Saxony and has taught a lot of young clowns.

Laura, how would you define a typical class clown?

First things first: not all class clowns are the same. The behavior can be very different. One is constantly making - supposedly - funny comments, another is more of the hyperactive type, mimicking classmates and teachers or constantly dropping things on the floor. What they all have in common, however, is somewhat noticeable behavior. And they develop these behaviors when they experience positive reinforcement.

What is the motivation behind this?

That too can be very different. Some of these so-called clowns actually have a knack for humor and skillfully showcasing themselves. Some want to distract from something else, for example a feeling of insecurity or overwhelming, or they test their limits. A change in the domestic situation, for example the birth of a sibling, can be a reason. However, it is a wrong conclusion that a student consciously chooses the role of a class clown. The whole thing is a group dynamic phenomenon. It's like in the theater or in the circus: a clown cannot function without an audience. And not every class clown is intentionally acting conspicuously. Sometimes it is also a particularly bumbling student who constantly forgets something or who often gets things out of hand. If he gets attention as a result, he may actually do it on purpose at some point. And one must not forget that sometimes it is the teachers who put such a stamp on a student. A statement like "Well, you're quite a clown again today, aren't you?" Can quickly become a self-fulfilling prophecy.

This teacher takes courageous measures against the class clown.

Strictly speaking, class clowns only seem to be about being funny, in reality it's about being noticed. In the end, it doesn't even matter whether they receive positive or negative attention. Class clowns can be the stars within the class community as well as outsiders, either way they have a special status. Of course there is the type who often lets go of a witty saying that the teacher laughs at. The forgetful, bumbling type is also one of the pleasant ones. It becomes problematic when there is aggressiveness behind the supposed wit and the jokes are at the expense of others. This of course makes a student unpopular and creates a bad mood. It also gets exhausting when the thing is overdone: At the beginning it is still funny, but at some point it becomes penetrating and annoying and the classmates are only annoyed.

How do you as a teacher deal with class clowns?

Jürgen Plass [Head of the Fulda Educational Advice Center] once wrote: “With their sense of humor, class clowns can also be an enrichment for lessons. But it is important that the children know their limits. "I think that applies to the matter very well. If I have the impression that a student is exaggerating, I first observe and exchange ideas with colleagues. It is also helpful to call in class representatives to see how classmates assess the matter. In the event of rule violations, for example if the supposedly funny sayings become disrespectful or insulting, action must be taken immediately. Otherwise there will be one-to-one conversations with the student, and parents may also be called in. However, some parents do not even recognize their children in the description of a class clown. That’s the thing with group dynamics again: some of the people who play the clown in class are very calm and inconspicuous at home.

What will happen to the class clowns after school? Do you continue to go through life as a joker? Or are you rather happy to be rid of this role? Will some of the class clowns become the next star of stand-up comedy?

Of course, you can't say that in general. I also don't know that there are academic studies on it. What should you go by, what criteria should you apply? After all, we're talking about young people who are still in the middle of the process of maturation. Personally, I think that the end of school always marks a new beginning and that the students can take all sorts of developments. Jokers get really serious, and quiet, shy guys suddenly discover their sense of humor and get out of themselves. And as already mentioned, the role as a clown is only possible in a certain group constellation, in a certain social structure. If the group dissolves, this role may no longer exist. But who knows? People like Mario Barth now fill entire stadiums. Perhaps he first tested his comedic skills in the role of a class clown?