Which unfaithful Kurfuerst shocked you the most

While the Rastatt Envoys' Congress was still in session, the Second Coalition War broke out in early 1799 after Austria had joined an alliance between England and Russia against the French Republic. On the other hand: La méfiance de la Prusse à l'égard de l'Autriche, soupçonnée (non sans raison) de vouloir prendre sa revanche sur Frédéric II, explique en grande partie la neutralité prussienne * [Kera00]. The Habsburg military hastily left Freiburg, while French troops quickly pushed into the vacuum that was created. The occupiers commandeer hay, cattle and fruit. Even the craftsmen are unemployed and without a job [Rieg23]. The behavior of the French reveals the intention of causing excesses and confusion everywhere, in order to have a pretext to plunder the country completely before the surrender [to Modena] [Bade82]. 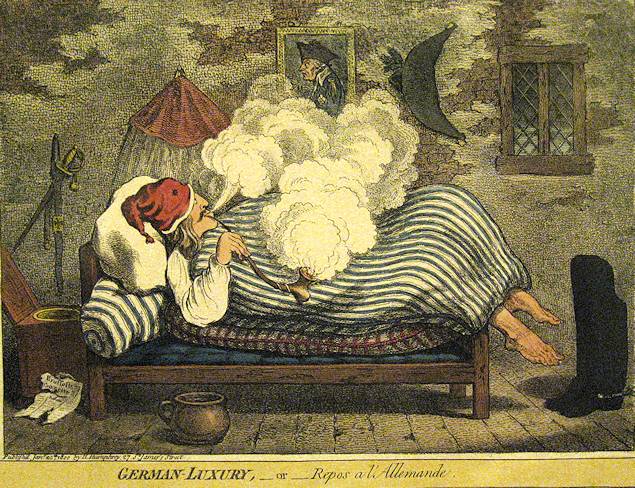 German luxury or Repos à l'Allemande. Caricature by the English draftsman James Gillray
about the non-participation of Prussia in the 2nd coalition

* In six months the coalition achieved extraordinary successes, for after the victories of Suvorov it forced the French to evacuate all of Italy in the spring of 1799. The Russians had left Italy, but the Austrians are on the French border; beyond the Alps, the republic only owned Genoa. At the same time Archduke Karl had defeated Jourdan and Moreau in Swabia on the Rhine front as well as Massena near Zurich. Finally, after an Anglo-Russian troop landing, a third front had opened up in Holland.

Now the French are withdrawing from the Breisgau. With reference to the military difficulties of the republic, Napoleon overthrew the Directory on 18th Brumaire X (November 9th 1799) in Paris. Later he confesses: In no part of his life did he need greater flexibility [Flei13].

* Citizens! The revolution is firmly bound up with the principles from which it started; it is over! I am the revolution.

** The first measures of Napoleon's new government, the constitution of the year 8, favorably commented on the moderate English. In Madrid, the note published by Ambassador Guillemardet on December 7th is largely agreed: The aim of this (new) revolution is to consolidate freedom, equality and security of property on a less volatile basis, to pull the republic out of its inner tower, to guarantee the inviolability of the security of the people and finally to dictate an honorable peace (Ferdinand-Pierre-Marie-Dorothée Guillemardet, French Ambassador to Spain)

After this announcement, there is no longer any fear of renewed chaos, as the radicals had caused. This was what the bourgeoisie had been waiting for: Napoleon as the protector of the citizens against the excesses of the revolution. At the same time, the 1st Consul, as a defender of revolutionary achievements, takes a stand against reactions such as equality before the law, religious tolerance with the simultaneous confiscation of church property, the Tricolore as the national flag and declares: Je suis la Revolution * [Bell12]. But Napoleon doesn't hide the fact that when I have knocked down the monarchists with the saber, I will use it for other purposes [Gall10]. So Napoleon set about reorganizing the revolutionary army, which is now invading Breisgau again with renewed vigor.

* I am the revolution.

Government President Sumerau again calls on the residents of Upper Austria to arm themselves in support of the imperial military in order to defend their most precious things - religion, property and sovereignty - by means of a general country storm [Bade82]. He instructs Hermann von Greiffenegg to set up a mobile corps of the Upper Austrian-Breisgau Land militia. With great bloodshed, those inexperienced in the craft of war tried in vain to stop the intruders, and so the French occupied Freiburg again in April 1800. 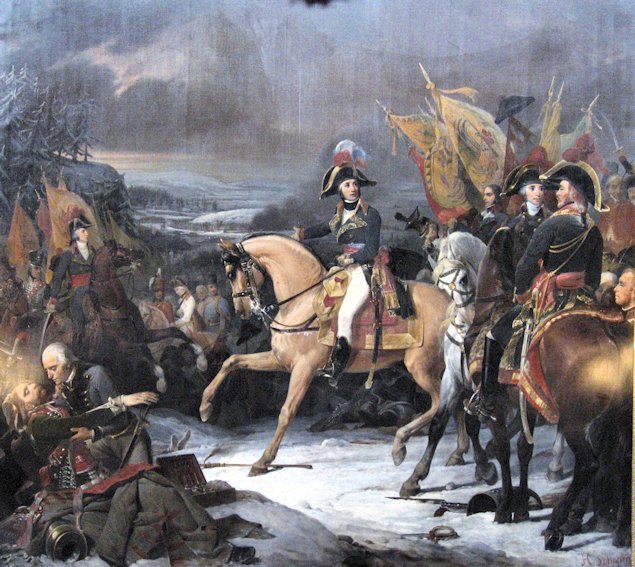 Meanwhile Napoleon storms from victory to victory in northern Italy and decisively defeats the Austrian troops in the battle of Marengo. With the complete conquest of northern Italy, he made François I's dream come true. Finally, Austria's devastating defeat near Hohenlinden, east of Munich, ended the Second War of the Coalition. The subsequent peace at Lunéville in February 1801 confirms the cession of all territories on the left bank of the Rhine to France as decided by the German princes at the Rastatt delegates' congress. Thus Napoleon also realized Louis XIV's plans that, according to Articles 6 and 7 of the peace treaty, the valley path of the Rhine from the outflow of this river from Switzerland will form the border between France and Germany from now on [Ling10].

In December 1801 Johann Gottfried Seume from Leipzig breaks to his Walk to Syracuse on. By then the writer had already had an eventful life. As a student of Protestant theology, he was kidnapped by Hessian soldiers on his way to Paris in 1781 and sold by the landgrave to England to fight in the American War of Independence. When Seume lands in Halifax in September 1782 after a 22-week crossing, the war is already over. In autumn 1783 he was transported back to Bremen and was forced into the army of Frederick II, in which he served as a musketeer until 1787. After studying philology, he finally found himself as adjutant to the Russian general Iosif Igelström in Warsaw during the unsuccessful suppression of the Polish uprising of 1794.

At the end of 1801, Seume decided to hike in the direction of Sicily on shoemaker's pony and first came to Austria. At the beginning of 1802 he crossed the Cisalpine Republic created by Napoleon, whose inhabitants could not do anything with the new regime and long for the reign of Emperor Leopold. Seume then observed the fat clergy in the Papal States, while people in Rome were starving to death. The political conditions are worst in the Kingdom of Naples. Robbers are up to mischief on the streets and mule tracks. Whole tracts of fertile land in the hands of large landowners lie fallow while people are starving. Joachim Murat by Napoleon's grace, King of Naples, is not yet in the starting blocks.

On the way back from Syracuse to Leipzig, Seume experienced July 14th in Paris. At the festivities he sees the little big Napoleon: He is called here by different names, le premier consul, le grand consul, le consul preferably. Perhaps the French would very much like to see him as a general, but not as a sovereign, as it is quite popular. Il fait diablement des choses, ce petit caporal d'Italie; cela va loin! * one says [Seum03].

* This little Italian corporal does a hell of a job. That will go a long way!

With his coup d'état of 18th Brumaire VIII, Napoleon had not only betrayed the revolution, in Seume's opinion: since Bonaparte decided to bury freedom again, it seems to me as if I had only become a republican ... In the Strasbourg area I heard here and there that his name was gnashed and claimed that he was reintroducing all the old nonsense that was believed to have been driven away for ever.

Napoleon had recognized: Une société sans réligion est un vaisseau sans boussole * [Mull14a] and decided: The people need religion, and this religion must be in the hands of the government [Kleß07]. In a concordat concluded with the Catholic Church in 1801, the Pope recognized the loss of church property during the revolution. From now on, all clergymen are appointed, paid and sworn allegiance to the state by the French government. In all logic, Napoleon abolished the revolutionary calendar on April 6, 1802 [Maye10b].

* A society without religion is like a ship without a compass

The traveling Seume comments on this, deeply disappointed: He could have become a savior of a large part of humanity and is content to be the first born again son of the Roman Church.

Like Frederick the Great, Napoleon ruthlessly used religions for his own benefit. However, with the resurgence of the Catholic Church in France, the contrast between Catholics loyal to Rome and Gallican Catholics breaks out again. After the Bishop of Strasbourg Saurine, Napoleon had betrayed the Gallican Church and trusted a constitutional prelate regarding the coronation of the 1st Consul as emperor: Je vois comme vous d’un mauvais oeil la venue du despote romain * [Mull14a].

* Like you, I look forward to the coming of the Roman despot with great suspicion.

Seume also notes in his travel diary: He is also called as a joke Sa majesté, and I do not guarantee that it is not serious. It's also called quite publicly empereur des Gaules, perhaps the most appropriate name for his character, which at the same time reminds the French of the possible consequence ... Fate had placed the power in his hands in his hands to become the greatest man in world history: but he did not have the sublimity enough to do so and sat down on the same footing as the rest of the great. It is larger than the Dionysis and Kromwelle; but he is so in her way, and earns her fame.

I could cry; I feel as if an evil spirit has ruined my heaven. I wanted so much to worship a truly great man one day; I can't do that here [Seum03].