How can you predict that dinosaurs are extinct?

Dinosaurs: death from the cold?

Catastrophic permafrost: The dinosaurs probably just froze to death around 66 million years ago. Because a new climate simulation suggests that the earth cooled catastrophically after the impact of the asteroid. The global mean temperatures could have fallen below freezing point - and this frost lasted for several years, as the researchers found.

It is clear that the dinosaurs became extinct around 66 million years ago, but what caused their end and how quickly it came has been debated for years. Some see the impact of the Chicxulub asteroid as the main culprit, others in the catastrophic volcanic eruptions of the Deccan Trapps or in a double strike of both. It is also disputed whether the dinosaurs were already in decline or whether they suddenly came to an end.

Julia Brugger from the Potsdam Institute for Climate Impact Research (PIK) and her colleagues have now investigated in more detail the consequences of the asteroid impact at the end of the Cretaceous Period on the climate and thus on the environment. For the first time, they used a coupled climate model for the atmosphere, ocean and ice, as is also used for current climate forecasts.

Below freezing for years

The result: Even worse than the short-term effects of dust, fires or catastrophic tsunamis were the long-term climatic consequences of the impact. Because with this, large amounts of rock evaporated and this also released a lot of sulfurous suspended matter. These sulfate aerosols, however, formed a veil in the atmosphere that cooled the climate more than previously thought. 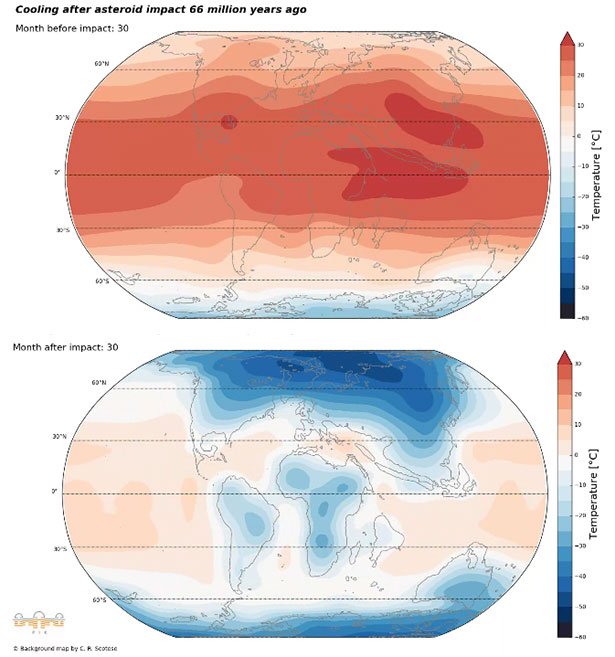 Drastic drop in temperature: global climate 30 months before and 30 months after the impact of the Chicxulub asteroid © PIK

"It got cold, and really cold," reports Brugger. The global mean annual temperature fell by at least 26 degrees and remained below freezing for three to 16 years. For comparison: Even during the Ice Ages, the global mean temperature only fell by five to six degrees - significantly less than at the end of the Cretaceous Period. Even in the tropics, it cooled from an average of 27 to just five degrees Celsius, as the simulations showed.

Worse than darkness and fires

"The extreme cold after the impact of the asteroid that formed the Chicxulub crater in Mexico is a turning point in the history of the earth," says Brugger. For the dinosaurs used to tropical warmth, this cooling could have been particularly fatal. Their large bodies needed a lot of energy to maintain their temperature, and at the same time food was scarce due to the cold, fire and darkness.

"The long-term cooling by the sulfate aerosols was much more important for the mass extinction than the dust, which only stayed in the atmosphere for a comparatively short time," says co-author Georg Feulner from PIK. "And also more important than local events such as the extreme heat near the point of impact, forest fires and tsunamis." Because the climate probably only returned to normal after around 30 years and the meteorite winter ended.

In addition, the ocean circulation was disturbed by the climate change: The surface water cooled down and therefore became denser and therefore heavier. As these cooler bodies of water sank, warmer water rose and carried nutrients to the surface. That likely triggered a massive and potentially toxic algal bloom, the researchers said. This affected the ecosystems in the sea and also on the coasts.

“It's fascinating to see how evolution is in part driven by coincidences like the impact of an asteroid. Mass extinctions in the history of the earth show that life on our earth is quite vulnerable, ”said Feulner. “It also illustrates how important the climate is for all life forms on our planet. Ironically, the most direct threat today is not natural cooling, but man-made warming. "(Geophysical Research Letters, 2017; doi: 10.1002 / 2016GL072241)