Are there engineers at Mica

Industry 4.0: machines with a cold call the doctor themselves

Will products be manufactured in fully autonomous factories soon? And will the working machines wait themselves? What role do people still play in the Internet of Things? The following story provides the answers. It's fictional - but the protagonists and technologies are real. 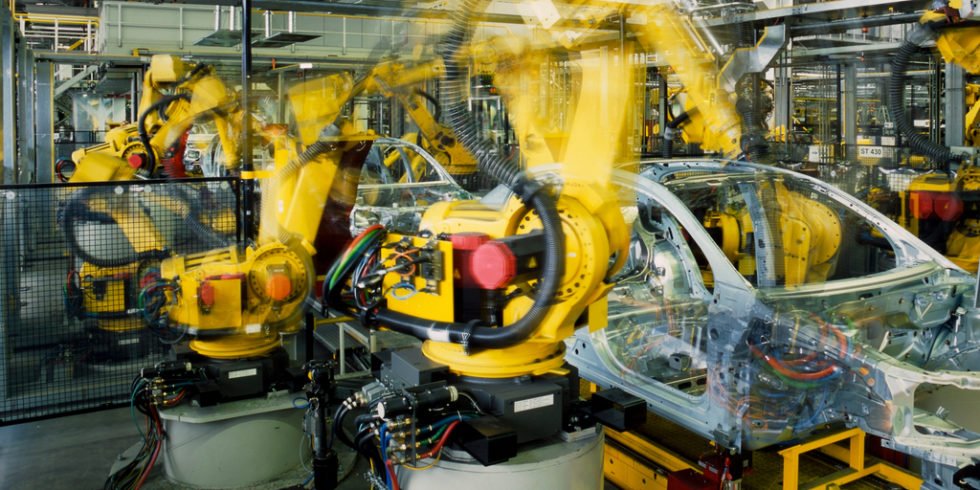 The poor tin! As soon as it has arrived in the windowless production hall, a total of 246 Kuka robots pounce on it from all sides. It looks like a scene from a “Terminator” film: there is hum and hissing everywhere, servomotors howl, sparks fly, lasers shine. Folded, welded, glued, checked and forwarded fully automatically on an area of ​​over 31,000 m2. It smells of oil and hot metal.

No question about it: Here at Kuka Toledo Production Operations LLC in Toledo, Ohio, the machines are in charge. Within a few hours, they assemble the body shell of a Jeep Wrangler from around 250 individual parts. The plant spits out 900 of these every day - in eight different model variants.

Ten of the robots, all of which were designed in Germany, deal exclusively with quality control. They don't have much to complain about. “Of the 245,000 car bodies that we manufactured in 2015, only three deviated from our strict tolerance values,” says Managing Director Jake Ladouceur. This is possible because the robots also monitor themselves. "Thanks to a series of sensors, they report impending problems long before they become acute." The Internet of Things makes it possible.

Harting KGaA has recently become a supplier of sensor solutions. The family company from Espelkamp in East Westphalia has been offering industrial connection technology since 1945. In the past, it was essentially about transporting electricity. Today, data and signals are added.

"The connections are becoming more and more active and intelligent," says Harting board member Frank Brode, who is responsible for new technologies. “The connectors in our Han-Modular series are a good example. They can be configured individually on the Internet. In addition to the power supply, there is space for pneumatic lines, fiber optic cables and Ethernet connections. "

Whatever flows through the cables: Everything can be controlled. Integrated sensors make this possible. They send all the data they collect to the Harting industrial PC "Mica" via RFID. "From here they then flow into the customer's ERP system," says Brode. "He can then take countermeasures at an early stage if problems arise." A major advantage of the sensor-equipped connections: They can also be used to make older machines fit for Industry 4.0.

The energy and automation technology group ABB also offers a retrofit solution - for electric motors, for example. Outwardly it is just a small, inconspicuous metal box that is fixed on the motor housing. Inside, however, there are a number of sensors - dust and splash-proof. "For example, they measure the temperature, the vibrations in three axes, the sound and the magnetic field," says Greg Scheu, member of the Executive Committee. Whenever there were deviations from the target state, maintenance experts would be alerted. According to ABB, downtimes should be reduced by 70%.

Especially in the process industry, for example in chemical plants or refineries, it is already teeming with sensors, actuators and analytical measuring devices. They are monitored, controlled and regulated by a process control system. The alarm is received there in the event of irregularities.

In a showroom in Houston, ABB is demonstrating what such an alarm can look like and how the problem can be solved. The latest version of the process control system 800xA is set up there.

The scene is impressive: suddenly an acoustic signal sounds. The color of the ceiling lighting changes immediately. It changes from green to red. In addition, the desk rises and forces the operator to get up. His full attention is now guaranteed. The tilt angle of all monitors adjusts as if by magic. Any experts who may have been summoned now have an optimal view of what is happening. The problem area is automatically played on the central monitor. There you can intuitively switch between process graphics, live videos and current operating instructions.

At the same time, a voice connection is established with a service technician on site. The plant operator explains the problem in a dialogue. At the same time, with a click of the mouse, he sends the assembly instructions required for repairs to the specialist's tablet PC. Thanks to a “sound shower”, the conversation is acoustically largely shielded from disturbing background noises.

An example of overengineering? Scheu responds with a statistic: “Of all unplanned production interruptions, 40% are based on operator errors. Our system can minimize them. "This is made possible by tailor-made information. “The plant operator is not inundated with numbers and graphics. He is served what is necessary to identify and eliminate safety-critical incidents. "

Above all, however, the entire manufacturing process will be significantly more effective. “Thanks to the structured overall overview that our solution allows, individual sub-areas of the production facility can be better coordinated with one another. Any problem cases are recognized earlier and remedied more quickly - at best long before they become acute. "

As a successful practical example, Scheu refers to a copper mine in Sweden. It should be closed. According to conventional evaluation standards, it was considered to be exploited. "But after the introduction of our integrated solution, it is one of the most productive mines in the world."

Internet of Things: Safe maintenance, control and professional repair - even over long distances

Back to the alarmed service technician: If he cannot repair the machine with the assembly instructions on his tablet PC - for example because of a software problem - an innovation from East Westphalia could help. The Blomberg-based company Phoenix Contact, specializing in electrical connection and electronic interface technology, offers the mGuard Secure Cloud. This is a remote maintenance and remote control ecosystem, designed as a plug-and-play solution. It allows even technical laypeople to control, check and, if necessary, reprogram machines via the web.

"The question of transmission security naturally arises here," says Frank Stührenberg, CEO of Phoenix Contact. It also provides an answer: Virtual Private Networks (VPN). The garden hoses, which allow information to flow through the Internet - invisible from the outside - are clearly shown.

The hardware from Phoenix Contact is plugged into the ends of the "hoses". In the factory it is integrated into the control cabinets of the machines. The service technician has a desktop device. Both sides now only have to be connected to the Internet. The user then logs on to the system and can control and program the machines via the graphic interface. He is spared having to familiarize himself with the complex subject of VPN development.

Bosch Rexroth offers an alternative solution for remote maintenance. The service technician only has to point his smartphone towards the defective machine part and - using a special app - start video mode. Alternatively, he can also use video glasses. The resulting film is broadcast live to the component manufacturer via the cellular network.

There sits an expert whose hands are being filmed on a camera table with blue screen technology. This film, in turn, is superimposed on the service technician's image material in real time and played back to him. In this way, the product expert can show the technician on site exactly which parts need to be removed and how to reassemble them later. He can also show the required tools, equipment or documents.

Currently, the solution is primarily intended for in-house problem solving. So far there has only been an exception for the service for heavy-duty drives from the Hägglunds brand.

Software developers and machine builders are dependent on one another

Bosch Rexroth also relies on predictive maintenance so that there are no problems in production in the first place. "For example, we have long been installing sensors in our hydraulic power units," says Steffen Haack, who is responsible for industrial applications on the Bosch Rexroth AG Board of Management. "The collected data is continuously evaluated using data mining algorithms in order to calculate a Machining Health Index." If this indicator falls below a threshold value, customers are informed. "You will receive the appropriate maintenance recommendation right away," says Haack.

The self-learning systems are being further developed by Bosch employees in the USA. “In order to implement the recommendations of the American software experts, however, a deep understanding of the machine is required. And only the hardware manufacturers have that. "So both sides are dependent on the other's domain knowledge.

Haack does not expect fierce competition with manufacturers from Asia in the near future. He expects a scenario in which the digitization of production is advancing rapidly. “This requires highly integrated high-end technology and open standards. Industry 4.0 wants to herald the end of manufacturer-specific interfaces in automation technology. The hour of the technology specialists comes. And Germany is well positioned there. "