A lot to discover in Pop in India: Bollywood is Tollywood

Indi, Hindi and Indie: A journey through the diverse and cosmopolitan Indian pop culture, its peculiarities, stars and talents. 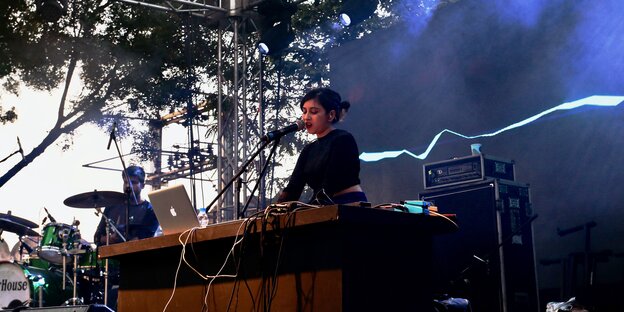 From the vendors' radios: the hits are always buzzing inside on the roadside. But the hits on the radios come from the cinema, such as “Lootmar” by Asha Bhosle, a melody from the retro Bollywood strip of the same name. Bhosle also has sung for many other films. If a film is to be successful in India, the soundtrack has to be right.

A basic rule that has become more and more important over the past decades, especially in large cities such as the 20 million metropolis of Mumbai, which attracts young artists from all over the country. The music and film industries are close together in India. It is therefore not surprising that pop music in India is closely linked to the Hindi film about Bollywood, the South Indian cinema (alias Tollywood and Kollywood), but is always well connected to the pop scene in Great Britain - if only because of its colonial past.

The Urdu hit "Ko Ko Koreena" by Ahmed Rushdi (1966), which was produced in neighboring Pakistan and sounds very traditional to today's ears, is considered one of the first pop songs on the subcontinent. Much has changed since then: the music that linked the former “British India” has dared to make the leap from traditional sounds to pop, while the musical relations between India and Pakistan have faded due to the political conflicts between the two neighbors.

The Mumbai film scene hired talented youngsters in search of hits. Once independent artists: Inside migrated there. Among them was Alisha Chinai, queen of the new indipop genre, who initially started out with Madonna covers. Indipop came up in the 1990s and sounded different than the typical arrangements with tabla drums and harmonium: the songs were shorter and more suitable for radio. It was sung in Hindi and Punjabi and contemporary sounds from synthesizers and drum computers flowed into the music.

The path of Mohit Chauhan, who became known with the legendary Indian band Silk Route, also led to the much more lucrative film business as a playback singer in the early 2000s. Chauhan's songs, like the music of the folk fusion band Indian Ocean, created a new awareness.

Mumbai musician Nikhil Rao, 36, remembers well that many songs that were played by Indian bands at the time were cover versions from the West. The hip city dwellers looked down on local music. It took time for Indian artists to find themselves and start writing their lyrics in local languages. "That was part of India's long path of decolonization," explains Rao, who joined Indian Ocean in 2013 as a guitarist.

Previously, only folk and film music was sung in local dialects. Indian Ocean was one of the first modern bands to give Indian-language music its own character and also to experiment musically with classical music, jazz and ideas from Sufism. Gradually a rock scene also developed in India. In 1993 she got the first independent music magazine in the country, the Rock Street Journal(RSJ), a face. Its founder, Amit Saigal, initiated various events.

It was the time when alternative music festivals became fashionable. Including the “India Music Week” in the capital Delhi, which took place between 2011 and 2013. It became a platform for new acts from all over South Asia. Until his death in Goa in 2012, Saigal also shaped the alternative music scene as a promoter. Satellite television also became popular in India during its creative period, and MTV established itself as a music program. As early as 1996, the TV broadcaster opened an office in Mumbai, West India, as a joint venture.

This also made the Indipop genre big and promoted itself with video clips. "Back then, folk even overtook the Bollywood sound," explains Rao. There were many female artists in the ranks of indipop as early as the 1990s, but the Indian music industry is still dominated by men, as is film music. Since 1931, only three music directors have been nominated for the coveted "Filmfare Awards". In the last few years, however, exciting female artists have appeared again and again. "Thanks to the digital sphere, there are now greater opportunities to get in touch with the audience and the acceptance of female artists is increasing," says singer-songwriter Ditty (aka Aditi Veena), who has been on stage since she was 14.

Dawn of the indie scene

Ditty belongs to a new Indian artist: the inner generation who have simplified their music in contrast to the mainstream. "It feels like dawn in the indie scene," says Ditty. In the lockdown year 2020, she used the forced break for a new project. “I have brought together an international artist collective called Faraway Friends, with whom we address pressing questions about society, the climate crisis, inequality and gender equality through music,” she says.

For her latest collaboration, the album "Rain is Coming", Ditty worked with rapper Keno (Moop Mama) and producer David Raddish, whom she met on a trip to India. Together they sound like rap fusion with Indian folk music, which also comes across as lively thanks to Ditty's delicate voice. For Rao, it is precisely the cross-border artistic exchange that makes music exciting. This is now easier thanks to new technologies.

If you want to immerse yourself in this colorful pop world of contemporary sounds in South Asia, the blog "Wild City" is the best choice. This is where current debates in the scene are initiated. At their club nights and the blog's own boutique music festival Magnetic Fields, “Wild City” prefers electronic sounds, but also has a feel for new talents of all styles. Among them is the Mumbai-based singer and composer Aditi Ramesh, who draws from her South Indian roots in her 2020 single "Sambar Soul", inspired by blues and jazz.

Charisma also has Kayan, singer-songwriter and model who produces fine pop that transcends her Indian origins. More musicians are on the rise, such as Tarana Marwah aka Komorebi and her nostalgic sound and the experimental electronica by Sandunes, who played a great concert at the Magnetic Fields Festival in front of a palace backdrop in 2017. Just like Ditty, she is part of the music platform "Border Movement".

This also promotes the exchange between South Asia and Germany. There is also music from overseas: The Indian diaspora is scattered all over the world, such as Madame Gandhi, who made a name for herself as the tour drummer for M.I.A. made. Or the Swiss Priya Ragu with Sri Lankan roots and her Tamil-tinged soul. Or the Goan woman Tracy De Sá, who now lives in France, who, like the other two artists, plays very creatively with rap and trap elements.

While the Hindi music scene is characterized by pop songs, rap and, above all, Punjabi singers, who have also adopted beat structures from Caribbean reggaeton over the years, there is, on the other hand, a growing number of Indian indie artists: inside who have made their careers with them Songs started in English and then switched to Hindi. And so they also reach a wide audience, in their home country, but not only there.

Most famous is the 31-year-old Prateek Kuhad with pop rock songs. One of them even landed on Barack Obama's playlist! Although German DJs like Oliver Huntemann and Innellea (Michael Miehing) are already touring India again, the country and thus the music scene must first digest the consequences of the corona pandemic. The ticket platform “Skillbox” quickly turned its focus to virtual shows, but the income was low.

In any case, there is a lot of music to discover in India. Pop has a wide range of styles, from English pieces, which are not easy to categorize, to songs in the regional languages ​​Tamil, Telugu, Marathi and Bengali. Cross-genre and cross-language sound experiments included.