How do I make a good team

Companies expect real miracles from team building: a good working atmosphere, higher productivity, better results and rapid progress are just some of the arguments. The feeling of togetherness in the team strengthens cohesion and prevents misunderstandings and scuffles. But how does the structure of the team work? We show what is important and provide you with numerous team building ideas and exercises ... 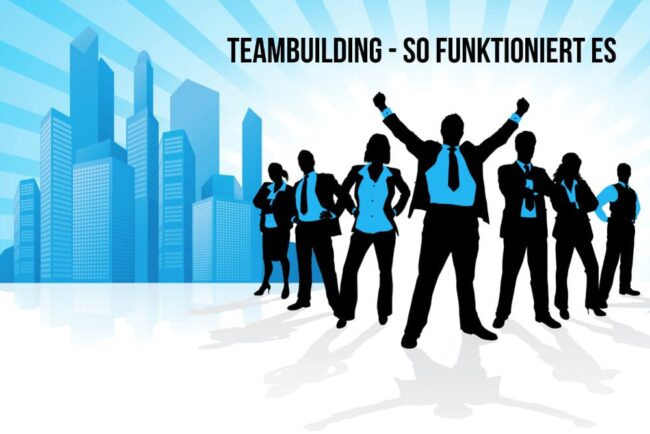 What is team building?

Team building refers to all measures and activities that are suitable for improving and strengthening interpersonal relationships within a team. The aim behind team building ideas and methods is to strengthen the bond between employees. This should increase job satisfaction and also have a positive effect on performance.

At the same time, team building is a term for the precise composition of the individual people in the team. These should be coordinated so that you not only get along well, but above all to be able to achieve the set goals. The Belbin team roles provide the ideal for this.

Some also use the term team bonding as a synonym for team building. The goals are identical, but you should look at the terms differently. In team building, ideas focus on achieving goals or solving tasks together. It's about positive experiences of success in the team that weld together. Team bonding, on the other hand, works through shared leisure time and relaxation.

The 5 phases in team building

A real team doesn't come into being in a day. It takes a process that turns a group of people into a team. The American psychologist Bruce Tuckman has developed a phase model with five successive steps. In Germany the model is also known as the team watch. Accordingly, the team grows together within the following phases: 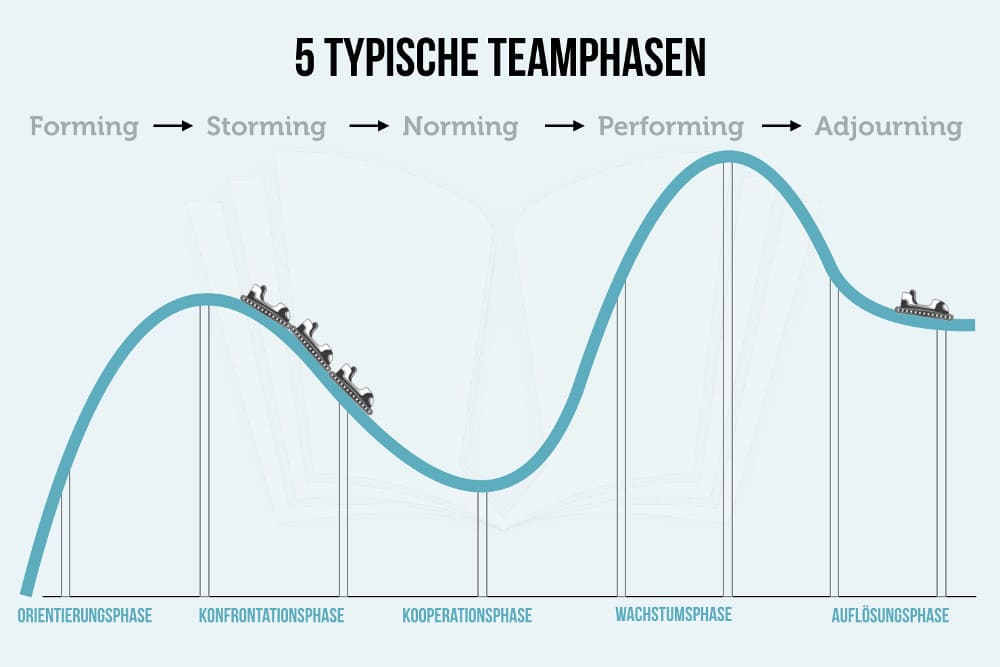 That means: Ideas and exercises for successful team building should be based on the various phases and be tailored to them. We explain what happens in the individual team building phases and which measures are suitable in each case to strengthen the team and the team spirit:

In this first team building phase, the team comes together and gets to know each other informally. Everyone is polite and nice to others, everyone is smiling and carefully feeling their way around. Nevertheless, everyone also observes each other very closely: who can with whom? Who is competent? There is still a lack of trust.

The main thing here is that the team members get to know and smell each other. Name games are particularly recommended at the beginning. Solving simple tasks in a team also makes initial contacts.

The team members find their role in the group - voluntarily or involuntarily. They have to weigh up their perspective, interests, and those of the group. This leads to conflicts and power struggles. Many teams fail and disintegrate. The group leader has the main responsibility. He has to provide orientation and find a consensus.

Group dynamic games and exercises help in this phase. These are intended to accelerate the team building process, strengthen cohesion and help overcome friction.

Ideally, by now all of their interests and ideas have been integrated into the common goal or have become subordinate to it. The group cooperates on a solid basis and has its own rules. Everyone knows what it's about and what part they can contribute to success. The team leader gives everyone the feeling of working on something bigger - the self-esteem of the team and the motivation of each individual increase.

The team is already on the way to becoming a cooperating entity. Trust games in team building can help to strengthen the bond.

Few teams reach this stage - if it works, success comes. The team building is finished, now there is real added value: The team creates more than the sum of its parts or members. The entire team energy flows into the joint project, it grows and flourishes. The team leader is hardly required at this point and should at best intervene in a protective manner if the group threatens to overheat due to sheer enthusiasm and ideas.

The team is now well-rehearsed. Relaxing games can be used to maintain a good mood. More difficult group dynamic games are also possible.

The last section is the adjourning, the dissolution phase. Ideally, this is a natural process: the project is complete, the group has done its job - hopefully with flying colors. In fact, some groups have long been in this phase without realizing it. They disintegrate before the end of the project. Reasons are divergent opinions, but also a lack of know-how or a lack of budget.

There are no more specific exercises and measures for this last phase. The team is already in the process of dissolution. If the cooperation has failed, the only thing that can help is often a replacement of the group members.

Regardless of the individual phases, there are of course numerous other ideas and possibilities to promote team building. Events and activities that the team conducts together are popular. Some examples are:

For many of these team building events there are providers and agencies who help with the implementation.

Due to the corona pandemic, some typical team building activities are currently not possible. Even without Corona, team building for virtual teams is always a special challenge: Team members do not usually see each other on a regular basis. Team building has to look different for home office and remote work.

It is not easy to form a team from a collection of individuals. In order for a team to be able to develop in the literal sense of the word, certain requirements are required, which are essential for team building:

Team building: who belongs in a functioning team?

An efficient and well-functioning team is a heterogeneous group of people (see: Diversity). Homogeneity ensures harmony, not performance, creativity and success. Nevertheless, the compilation is often based on other selection criteria:

With such an approach, the easy route is chosen. The decision is also made against the know-how and expertise of colleagues who do not always agree. However, it is precisely these different approaches that bring about the best result. You can find out which types each team needs in our free PDF on team building, which you can download here:

A perfect team is the big goal behind every team building. Unfortunately, however, a good working atmosphere and a good mood among employees are no guarantee of success. Even seemingly perfect teams can fail and deliver poor results. This is mainly due to the following causes: