How do digital radios change frequency 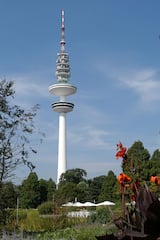 Frequency change at DAB + in Hamburg
Image: Media Broadcast There will be a major reorganization of the DAB + digital radio frequency in northern Germany in the coming weeks. The background is, among other things, an agreement with the Netherlands on DAB + frequencies and an optimization that reduces interference within Germany.

Frequency change at DAB + in Hamburg
Image: Media Broadcast For radio listeners in and around Hamburg, the frequency for receiving NDR programs via DAB + will change from Thursday, July 16. The broadcast from the Heinrich-Hertz-Turm and Hamburg-Moorfleet transmitter locations will then take place in block 10A instead of 7A.

The listeners in Hamburg and in the areas between Elmshorn, Bad Oldesloe, Lüneburg and Buchholz are affected. If the DAB + receiver does not automatically adjust to the new frequency, listeners must perform a search to receive the NDR programs.

The DAB + program offer also includes NDR offers such as NDR 90.3, NDR 2, NDR Kultur, NDR Info and N-JOY, which are also broadcast via FM. In addition, NDR Plus, NDR Blue and NDR Info Spezial can be heard exclusively on digital radio.

On July 16, the channel for private radio stations in Hamburg will also change: instead of channel 11C, channel 10D will be used. The program offer will not change here either, 17 private and non-commercial channels will continue to be broadcast in the Mux.

At a later date, the transmitters Schiffdorf, Steinkimmen, Aurich and Wilhelmshaven in northwest Lower Saxony are to switch from channel 12A to channel 8D, which is already in use in Cuxhaven. A date for this change has not yet been set.

In Bremen, Radio Bremen and the private sector will also change their frequencies. The muxes from Radio Bremen and Private will broadcast on channels 6D and 6A, respectively. The previously used channels 7B and 7D are moving to the Netherlands, where they are intended for new multiplexes. According to a program provider concerned, the radiation output should not initially change, although higher output has been applied for from the Federal Network Agency. No specific timetable has yet been set for these measures.

The 2nd DAB + Federal Mux starts in October. It is now also clear which third-party providers will start in the second nationwide multiplex.