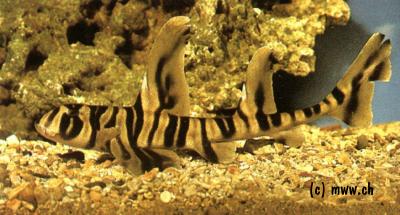 Occurrence:
In the western Pacific from Japan via Korea, China, Vietnam to Indonesia, around Sulawesi and on the north coast of Australia.

Size:
Egg shell - size unknown, likely similar to that of the California bull head shark; Young at birth approx. 15cm; adult animals up to a maximum of 1.20 cm


Biology and way of life:
medium-sized ground shark; two conspicuously large dorsal fins, these stand upright and are curved backwards at the upper end; in front of each dorsal fin an approximately finger-thick, very pointed thorn; Caudal fin is broad, the upper end elongated, the lower half short and wide; a strong body with a distinctive head shape, cartilage plates above the eyes that are reminiscent of horns - hence the name; five gill slits; very small spray hole directly under the eyes; very strong, blunt snout with plaster teeth, pointed at the top and wide and rounded at the bottom, they are used to pack and crush the price. Body color is very light, with many brown to dark horizontal stripes on it, similar to the zebra pattern - hence the name, the stripes are distributed over the whole body, also on the head; Reproduction - oviparous (laying eggs) via egg shape and development time is not known

Habitat:
Rare bottom sharks that can be found near the coast; Sharks have been spotted above all over the bed of rocks, here the sharks like to stay in crevices and caves; Depth from 50 m and deeper; preferred depth around 50m; off Australia animals were caught between 150 and 200 m depth


Keeping in the aquarium
Pool size:
Young animals from 1500 liters; adult sharks not less than 5000 liters

Temperature:
16 ° C to 20 ° C; not above 22 ° C - cold water sharks, socializing with tropical sharks is not appropriate to the species; above 29 ° C sharks do not eat any more, formation of deadly parasites within a very short time, formation of internal and external inflammation; Collapse of the pelvis; Cold-water sharks can suffer from illnesses and deaths from as little as 25 ° C

Lighting:
500 to 600 watts sufficient, animals are used to twilight


Technology:
Protein skimmer preferably with ozone feed, mechanical and biological filter necessary, approx. Every 3 weeks additional filtering via activated carbon, UV filter advisable, flow should be close to the ground, water circulation at least once the pool volume per hour


Pool design:
Creation of spacious caves or niches in a part of the basin with a good flow, rocks and large species of seaweed, e.g. Kelb, are also present in the natural habitat and are well received; The amount of water above the bedrock is sufficient as a swimming area


Socialization:
other cold water sharks such as cat sharks, swell sharks or smooth sharks, including leopard sharks; Cold water rays like thorn rays or eagle rays; Bony fish such as garibaldi fish, jackfish or sea bream; Crustaceans such as crabs or lobsters are possible, but these will be eaten over time


Food in the aquarium:
Mussel meat, sea urchins, starfish, shreds of fish fillet, squid, lobster, lugworms, etc .; live sand or rock shrimp and crabs; uneaten dead food should be removed from the tank after half an hour - pollutants; unused live food can remain in the tank; Make the feed varied, one-sided feeding e.g. only squid can lead to obesity; the feed must be enriched with iodine and vitamins;
Feeding of young animals two to three times a week, one feeding is sufficient for adult animals


Diseases:
Goiter formation - cannot develop with regular iodine administration / preventive care, if goiter has developed, increase in iodine levels, control of the course of the disease, continue normal, adequate iodine dosage after decrease
Mechanical injuries - if the water values ​​are good, heal automatically; unfortunately they deteriorate with bad water values; Inflammations from mechanical injuries can be treated in quarantine with antibiotics or sepso; Short treatments of the wound outside of the water are possible, but consider the effort and benefit, and also consider the risk of injury to the shark and keeper
Fungal attack - here too, a series of treatments in an extra basin with antibiotics has proven itself
Opacity of the eyes - same treatment as fungal infection
Worm infestation - here you can fall back on commercially available worming agents, the finished acclimatization agents also show good results, these are available from various manufacturers
Parasites - short freshwater cures have shown the desired success here
Swimming disorders - can be triggered by too small pools or rooms; Too many cleaner fish or so-called ship keepers press sharks in such a way that they get into constant stress and show symptoms of illness. Treatment options include keeping the sharks individually or enlarging the tank

Particularities:
Medium-sized, powerful shark that is very rarely shown in large aquariums. Thanks to its very attractive appearance, Art has recently been increasingly offered in the international pet trade. Sharks move very slowly, hardly any escape reactions. Only when animals are harassed do they snap. Economic use not known, as animals are relatively rare. Possible confusion with the Japanese bull head shark, as this species lives in the same area of ​​distribution and also has the distinctive horizontal stripes. This species is darker in the basic color and the stripes are not as pronounced. The dorsal fins of the Japanese bull head shark are also not that noticeably large.
When working with horn sharks you have to pay special attention to the two back spines, the sharks are very agile and the strong spines can tear deep wounds. A large landing net should therefore be used when moving or treating illness. You should also wear strong leather gloves. Feeding by hand should be avoided, the sharks partially suck in the food and grab the food with their plaster teeth. The bit holds everything in place with enormous pressure. If a hand gets into this mouth it can cause bruises and other injuries.