Will Britain produce its own Donald Trump

G7: Nothing works without Trump

They really have the same blonde hair color - Donald Trump and the new British Prime Minister Boris Johnson. Coincidence or political statement? And the American President and the Briton also demonstrated close bonds during their breakfast together. "He's the right man for the job," Trump praised, and promised a great, fantastic trade agreement between the two countries. Actually, if you want to believe the US president, it's as good as finished.

For the British Prime Minister, this is the opportunity to make the "huge opportunities" of Brexit palatable to his compatriots. So he comes up with an amazing list of goods that he plans to export to the USA in the future: the famous Melton Mowbray pork pie, cauliflower, shower trays and, above all, British wine. The British economy lives mainly from the service sector, but he hopes to introduce American friends to the hygienic and culinary achievements of the British.

Donald Trump, on the other hand, promises that everything will be very easy once the UK is freed from the "anchor at the bottom" - by which he means the EU. Nothing is easy, however. And Johnson had to declare that the British health system would by no means be opened up to US companies. He has to do that, otherwise the British would tear him up in midair. On the other hand, Johnson would like to be able to participate in public tenders in the USA - but many have dreamed of that. Those in the know know how tough the battle over the details of commercial contracts is, and that the devil lies in the details. 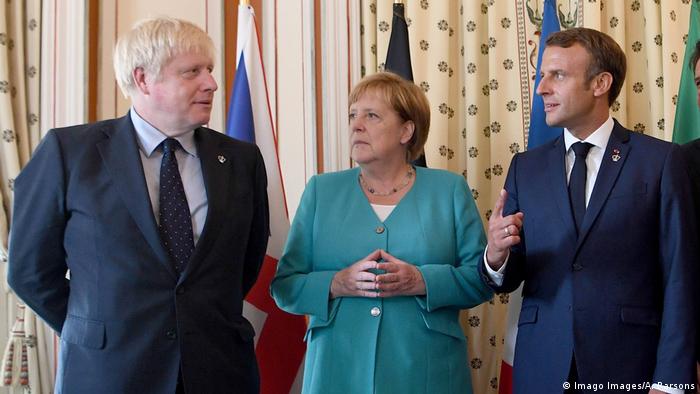 Tactics? Show a little closeness to the Europeans ...

The meeting with Trump is a tightrope for the British. He must have the president by his side and raise hopes for economic success. On the other hand, he must not stray too far from the Europeans, whom he will continue to need in terms of foreign and security policy. Johnson has already refused to invite Russia back to the G7, it was too early for that. The US President announced in the morning that he would invite the Russians to the next US summit in 2020. A few hours later, however, he put the statement into perspective and stated that the relationship was "still in progress".

Cross with the Europeans

However, Boris Johnson remains on a collision course with the EU. First he exchanged blows with EU Council President Donald Tusk about which of them will go down in history as "Mr. No-Deal" if there is a tough exit at the end of October. Then he continues to demand the summary removal of the "Backstop", the EU solution to the Irish border problem, and here in Biarritz he renewed his threat that he would not pay the Europeans' final bill of 39 billion euros. Boris Johnson is initially offering only 9 billion. The Elysee Palace countered that it would then be a case of default in national debt that would damage the country on the financial markets. 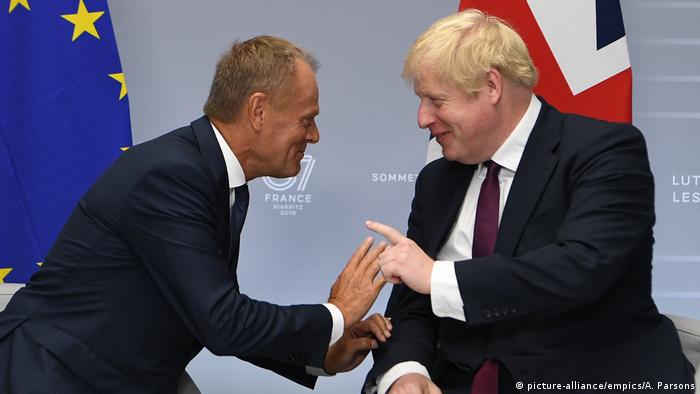 Who will be Mr. No-Deal - Tusk or Johnson?

No solution to the Iran problem

The good news of the first tangible result of the meeting in Biarritz, however, had a short half-life. It was said that the French president had been given a mandate to negotiate with Iran. Emmanuel Macron had spoken in advance with the Iranian Foreign Minister Mohammed Jawad Sarif to test Tehran's readiness. His plan was to get the US to moratorium on existing sanctions in order to make room for new diplomatic attempts to maintain and expand the nuclear deal.

But no sooner had the Frenchman's team announced the good news than the US President contradicted: "We didn't discuss that at all". You will establish your own contacts, but: "If people want to talk, then they talk". A snub from his host Macron, which adds another to Trump's previous rudeness and rudeness. The French President was forced to backtrack.

Against this background, the question remains of how vague the Amazon decisions of the G7 are. Here, too, Macron announced a resolution on the guidelines of the summit, according to which the fight against the forest fires would be supported financially and technically. The aid of the G7 group should go to the affected countries "as soon as possible". The French president pointed out that the Amazon riparian country Colombia had asked the international community for help. "That's why we have to show ourselves ready." An "international mobilization mechanism" is planned.

Earlier this morning, Donald Trump complained that the press in Biarritz had spread fake news because of tensions and a bad mood behind the scenes. "The leaders get along perfectly," tweeted Trump. But the truce he proclaimed at the G7 only lasted until noon.

The US President's message can therefore be interpreted on the subject of a trade was. The G6 - all except Trump - believe that the escalation with China is poison for the global economy and advocate breaking the spiral of ever increasing tariffs. When a reporter asked Donald Trump whether his allies would urge him to shut down the trade war, the answer was, "No, not at all. (...) You respect the trade war." Does he have any doubts about it? "Yes sure why not". So does he have any doubts about the escalation of the trade war with China? "I have doubts about everything".

Then, after a few hours, the White House press department revised hopes down, or up, however you like. The president only regrets not having pushed tariffs even higher. In any case, no policy can be built on such marginal notes, and the G6 are as smart as they were before after the discussion with the US President.