Sirius is a double star 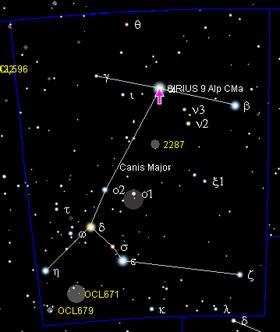 The dog star Sirius plays a bigger role in some one-pagers of the SUPERillu and is mentioned in the mosaic from 1976 onwards.

The Sirius (Alpha Canis Majoris) is one of the closest stars at a distance of 8.6 light years from our sun. In addition, with an apparent magnitude of -1.46 magnitude classes (= -1.46 mag), it is considered to be the brightest star in the night sky. (Note: the smaller the specified size class of the apparent brightness of a star, the brighter it appears to us.)

According to today's knowledge, Sirius is a binary star system in the constellationBig dog. Both stars move around their common center of mass with a period of approx. 50 years. This center of mass is closer to Sirius A, which is more than twice as heavy as Sirius B.

Of the two stars Sirius A and Sirius B, when observing with the naked eye, we only perceive the 10,000 times brighter component, i.e. Sirius A. Sirius B is the closest to our solar system White dwarf and only has an apparent magnitude of 8.5 mag. Both Sirius stars are less than twenty astronomical units (AU) apart, i.e. they are almost twenty times as far apart as our earth is from the sun.

So far, no planet or even a planetary system has been detected around the Sirius stars.

[Edit] Sirius allusion to the Digedags

In the space series of the mosaic by Hannes Hegen, a crew member of the spaceship RS-X1 is called from Neos, so another "star", Siria Kysur. It has a descriptive name in two respects, because the first name Siria is a name of Israeli / Jewish or Spanish origin and as a feminine form of Sirius applies, which in turn in its Greek origin may come from the siren Leukosia (The white / The glistening white light), or from its Indo-European (sparkle), could be derived.

Siria has noticeably light hair and a light mind, so she is a shining figure in the team, like Sirius is the most noticeable shining star in the winter sky.

[Edit] The Abrafaxe and the Sirius 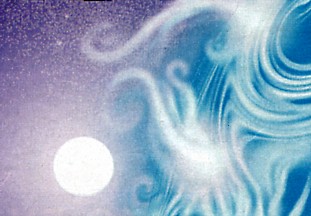 Playful flares over the chromosphere of the blue star seem to be reaching for the white dwarf.

[Edit] The curse of the Aga

When the Habikhjebikh advance towards the palace of the Agas, the latter cursed angrily: "But these villains don't get me, with the ten thousand points of the dog star!" The dog star is the main star of the constellation Big dog, so none other than Sirius.

[Edit] Sirius as an emigration destination

in the SUPERillu-Onepager 157 - The Abrafaxe emigrate - the Abrafaxe have set Sirius as their target. At the last minute, however, your cleaning robot throws a spanner in the works, as it should be solely responsible for the cleanliness of the house in your absence.

The Abrafaxe experience over four consecutive SUPERillu-Onepager adventure with a spaceship that gate up the Eiffel Tower with its anchor. The anti-gravity drive developed by Brabax "works satisfactorily, but unfortunately cannot be switched off." Here it is Califax that impresses with its logic: "Nonsense! What you can switch on, you can also turn it off." As a result, Califax tries to switch off the drive - with the result that the spaceship is now chasing through space at Warp 5, i.e. five times the speed of light. In its "logical action", Califax goes so far as to remove cables and other components from the control system. Finally, the Abrafaxe and their spaceship stop at Sirius. Both binary star components, both the hot blue giant Sirius A and the white dwarf component Sirius B, can be clearly seen. As it turns out in the last episode, the standstill apparently even occurred in the common center of mass of both stars. Because Brabax is not quite sure whether the Abrafaxe plunge into the white or blue sun, i.e. into Sirius B or Sirius A.

[Edit] Distance between Earth and Sirius in the Abrafaxe Universe

In the SUPERillu one pager Everything is relative Abrax brags that he landed relatively soft this time. Since the spaceship is battered and stuck in the ground, Brabax rebukes: "Yes, compared to the crash landing on Sirius Beta." No more is communicated about Sirius Beta.

[Edit] The Sirius plays a role in the following publications