What is the name of 20 bottles of champagne

Champagne bottles: all sizes, all shapes 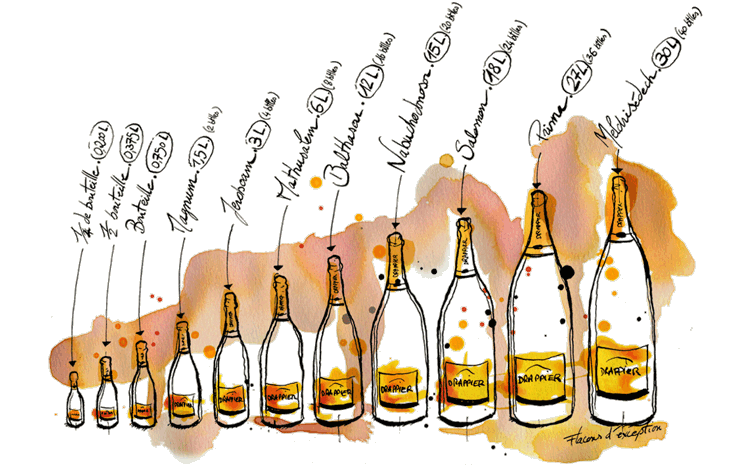 We got the champagne thanks to its bottle

In the 17th century, people began to store white wine and champagne in bottles rather than in wooden barrels, as its aromas could thus be better preserved. The English diplomat Sir Kenelm Digby invented the modern champagne bottle in 1634, which is reinforced by an additional glass ring at the neck of the bottle. This made it possible to poke the corks into the bottles with wooden hammers without damaging the cork or the bottle

The connection of this bottle with the solid cork makes the formation of kohnesäure possible. Because this can only be preserved if it develops in the bottle and this in the course of the second fermentation. Even today, with the new technologies available, the classic 0.75 liter champagne bottle has to be more resistant than a normal bottle. Accordingly, a champagne bottle also weighs 835 grams compared to 450 grams for a wine bottle.

The sizes of the bottles range from the small piccolo to the impressive Melchizedech (which cannot be carried by a single person). Each bottle size has its own story and its own peculiarities.

The big sizes are of course particularly impressive and can give a party or celebration that certain something. They are particularly useful for filling the famous champagne pyramids.

But despite or because of their size, the large bottles from the Jeroboam onwards are particularly sensitive and fragile. Firstly, it is difficult to carry out the manipulations that the bottles have to endure during production (shaking, disgorging, etc.) with such large bottles. Second, these bottles often cannot withstand the high pressure of the second fermentation. For these reasons, they are only bottled after the second fermentation, the resulting loss of carbon dioxide is compensated for by artificially adding the CO2 to the bottle afterwards. This does not change the quality of the Chamapgner, but it does take away the mysticism of these bottles.

Another problem is transportation, storage, refrigeration and service. Imagine a 30 liter bottle in your refrigerator, or maybe in the bathtub? The very large bottles are so sensitive that a small scratch or splinter can cause the bottle to burst. For the really big occasions it is better to have another bottle in reserve.

Both sizes are practical, they can be chilled and served without any problems. In addition, both sizes have good storage potential.

Size of the champagne bottles and carbon footprint

Good to know: since 2011 and thanks to the new production technologies, 0.75-liter bottles have only weighed 835 grams compared to the historic 900 grams. The effect on the ecological footprint of champagne is equivalent to an annual reduction in coal consumption of 8,000 tons, this is the same annual consumption of about 4000 cars.